Ian Wright has expressed surprise over Eddie Nketiah’s form for Arsenal since taking over the main striker duties from the injured Gabriel Jesus.

The Gunners lost a big asset when Gabriel Jesus returned from the 2022 FIFA World Cup in Qatar with an injury. The resulting surgery saw to it that the Brazilian, who had been key to the club’s rich vein of form up until then, would be sidelined for three months as he recovered.

Talk about getting in a new striker to replace Jesus became rife despite the club having Nketiah in the wings. Talks of recalling Folarin Balogun, another Arsenal striker who is currently on loan in France with Stade De Reims and putting up great performances. 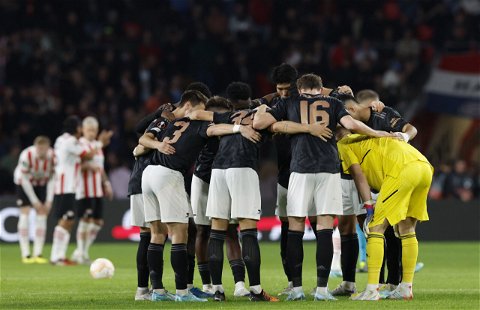 Nketiah, however, has proven all his doubters wrong since then. He is currently in the form of his life and is creating the kind of conversation that surrounded Jesus in his time at Manchester City – where the Brazilian had a much more limited role due to fierce competition for the centre forward position.

Arsenal’s second-highest goalscorer of all time and football pundit Ian Wright, has admitted that he was one of those who did not see Nketiah performing the way he did.

His comments came after Nketiah proved to be the difference between a close title race with defending champions Manchester City and some breathing space for Arsenal. After going 1 – 0 down in the first half to Manchester United on Sunday thanks to a brilliant Marcus Rashford goal, the former Chelsea academy product stole away from his marker to power a brilliant headed equaliser home.

Then with the scores tied at 2-2 going into additional time, Nketiah was on hand to deflect a loose ball into the back of the net and steal the three points for Arsenal.

Wright compared Nketiah’s awareness for the first goal to Gabriel Martinelli, who was expected to do more than the Englishman in the absence of Jesus.

“The reaction from Martinelli is different (prior to Arsenal’s opener),” said Wright on Premier League productions.

“With Nketiah. This is a brilliant ball in. Once they do work it. They work it really, really well – I think it’s Xhaka who gets in there, you look at Nketiah and Wan-Bissaka. Wham! That’s the difference.

“I wasn’t expecting those numbers (from Nketiah), but I know that he is somebody who gets into the box and then it’s up to him – this guy is a poacher. That’s his room. That’s where he works. Inside the box.

“Whether or not he would take the chances, especially in games like this, it was something he was yet to prove and now that he is proven that he can.”

Given that the 23-year-old English-Ghanaian forward had yet to score a Premier League goal this season and only had ten goals to his name playing in the Premier League so far, Wright could be forgiven for taking this stance.

Should Nketiah keep up his current form, Arteta will now find himself with a positive headache when Gabriel Jesus returns from injury.