All or Nothing - Mikel Arteta ( and Arsenal ) - Amazon Prime

Mad Tets took us to 5th in a season we were going to get relegated in. True genius

Won't watch this, just going to be filled with process propoganda and how Arteta is the right man to lead us 8th with ESR labelled as the next Rui Costa

That image of Arteta with the wolves, is kinda pathetic not gonna lie.

Everyone in that room is an adult, how is looking at wolves gonna help them

Gotta laugh at Saka's reaction: Abouuuuu, probably after he got done reading one of @AbouCuéllar essays, a task given to him by Arteta.

I quite like the trailer! It was an up and down season with quite a bit of drama. Will be fun to see what they have been able to cobble together! But then I am not hard to please, unlike the educated football connoisseurs on A-M! Put up an Arsenal logo and some dramatic music and I am all on board!

albakos said:
Gotta laugh at Saka's reaction: Abouuuuu, probably after he got done reading one of @AbouCuéllar essays, a task given to him by Arteta.
Click to expand...

Were it an essay you could argue the merits of it being a case study worthy of dissection & debate.

More likely than not, he was forced to read Dr. Sleep fanfiction

Riou said:
That image of Arteta with the wolves, is kinda pathetic not gonna lie.

Everyone in that room is an adult, how is looking at wolves gonna help them

Have you ever done any team sports? The **** coaches have told me and got me fired up makes me blush now! Young boys, and they are all young to me, who want to go out and win matches will get fired up by almost anything. Probably harder not to get them fired up than the opposite...

Pub League Mik, Out by November !!!

BergMan said:
I’d imagine we had a siege mentality. That whole dressing room felt cheated by the officials during and after that Sp**s game. I saw one of the coaches posting on Instagram hinting that he thinks it was rigged, before deleting it.

After Newcastle it was obviously bitter disappointment and everyone was quiet. This is my prediction.
Click to expand...

We lost three straight matches to bottom half teams in last two months of season, the officials screwed us and were incompetent but they aren’t the reason we failed miserably to Sp**s. Sp**s did everything they could to hand it to us frankly.

Proper stain on the club this.

Trusted ⭐
Artetas nasal cadence and How to Motivate for Dummies 101 embarrassing speeches might be the real reason he's a **** coach. He could be Guardiolas second coming, after listening to him in the dressing room I'd be cringing for the whole 90 minutes on the pitch afterwards 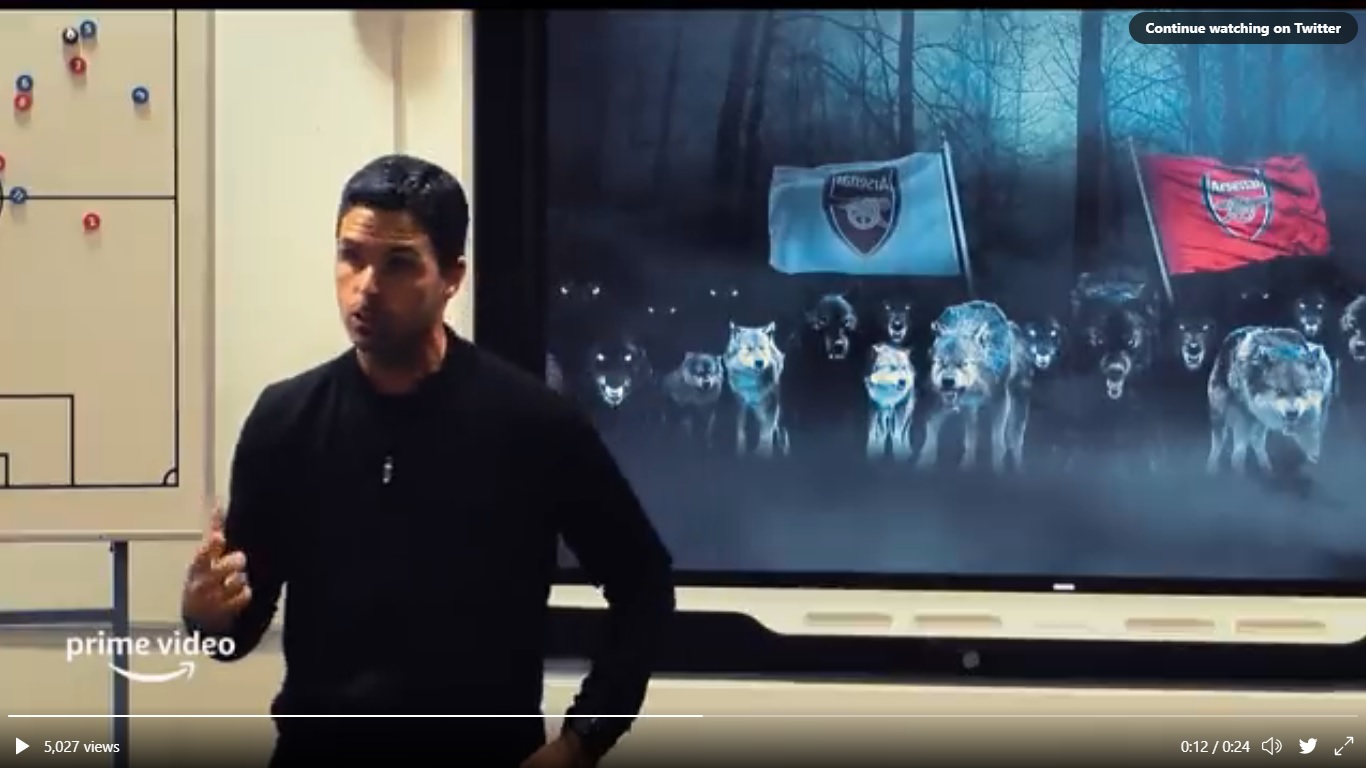 I have so many questions: who came up with the idea? who designed it? what was Arteta trying to convey with this image?
Click to expand...

Are those the Wolves from Twilight?

Trusted ⭐
I watched that clip a couple times more, almost tempted to see our Spanish Btec version of Brendan Rodgers tell Auba and Pepe to **** off.

BigPoppaPump said:
Are those the Wolves from Twilight?
Click to expand...

They're certainly not the ones the Stark children ride. Those are absolute units!

Trusted ⭐
Doubt I'll watch this unless you guys recommend it or there's something particularly interesting in it.

Tried to watch some of the Sp**s and Man City ones, could barely make it through a couple of episodes. Just Americanized fluff pieces for people who are casual football fans at best.

Only one in this sort of genre I could get through and enjoyed was the Sunderland one. That was largely due to the fan element in it. Just seemed much more real and gritty than the others.

Blood on the Tracks said:
Tried to watch some of the Sp**s and Man City ones, could barely make it through a couple of episodes. Just Americanized fluff pieces for people who are casual football fans at best.
Click to expand...

I've seen couple clips of both, terrifying prospect to sit through hours of that garbage. Literally American reality TV, this is how @grange imagines how football works when he's watching it with his buddies while skipping English class.

Trusted ⭐
Im actually looking forward to it. Bar an episode I think of the City one ive never watched any of these documentaries.

Trusted ⭐
Just saw the trailer for the first time.


Eh.... The first few seconds, they make it seem like a True Crime in which Arteta actually found the leak and destroyed him. (Can't really understand what Arteta says first, "we're brought on with a leak" or something?
Then the next part you'd think we would go on to win the league after that embarassing wolf picture.

I don't really know what to say more. Shambles.

I don’t get why so many are like “I don’t wanna watch this cause we failed the season”. That’s not what it’s about. It’s about fans connecting with, learning about and seeing the players, staff, and people associated with the club in ways you never seen.
Losing is part of football, and seeing the hurt and pain and the ways the players and staff handle pressure should bring us fans closer to them, solidifying that connection. You don’t just want to see the team happy at winning everything you want to see what they’re like when they’re angry, frustrated and under pressure too.
During moments at half time and full time (or even before kickoff) the players (and staff) aren’t going to be thinking about the fact that they’re being filmed, you get to see them in ways you never seen them before. Ramsdale throwing a water bottle, that seems genuine, and I bet you’ll see a lot more of that sort of stuff from a lot of players.
Too many worrying about our club being memed by rivals, water off a ducks back for me.
Threadmarks
You must log in or register to reply here.

I’ve told Dave to cut off his ponytail. I think it makes him less aerodynamic.