I've previously done threads for Arsenal top 10 strikers and CBs. So I'd thought I'll do one for GKs.

Out of the GKs you have seen, how do rate the top 10 Arsenal GKs?

2. Lehman - Our invincible GK in 03/04. Played a massive part in getting us to the CL final 2006, in particular his late penatly save against Riqulme in the final. Earned himself UEFA goalkeeper of the year that year too. Saved Scholes penalty in the FA Cup penalty final shoot out as we scored all 5 of ours to win it. Also saved penalties against RVN (just before the infamous handbags) and also saved a penalty off Gerard.

4. Szczęsny - Good keeper for us. Won PL golden gloves award for most cleansheets in 13/14. Kept a clean against Vila 2015 FA cup final. The Double save on the pool penalty from Kuyt after a dreadul dive from Suarez was outstanding bit of goalkeeping.

5. Cech - Had a very good first season with us, got MOTM and clean sheet as we beat Bayern 2-0 in the CL. Cech in his debut season with us won the golden gloves award 15/16. After this season though Cech suddenly got old over night it seemed (1 season with Gerry Peyton took its toll lol) and Cech peformances declined dramatically and he was poor in 2nd - 4th seasons with us. This saw Arsenal fans regretting the sell of Szczęsny.


6. Martinez - Leno last season had been our best player of the season untill he got injured. Martinez came in and was just as good till the end of the season for that short period of time. I wanted to keep both this season to fight it out to be the number 1 and sell the second choice at the end of season. Unfortunately Martinez didn't want to hang about and fight for the place when Arteta informed him Leno would start as first choice. Shame as Martinez has a lot abillity and may potentially be better than Leno.

7. Manniger - a very good back up keeper and I had full confidence in him when he had to step in. Earned himself a PL player of month award.

8. Lukic - I missed his prime and firstvstint with us between 83-90 where he was a league winning keeper for us. I only caught his second stint with us 96-01. Seemed a solid but not spectacular back up keeper to me.

9. Ospina - I think he is underatted due to him becoming error prone at the his end of his time with us. Prior to that I thought he was a good shot stopper.

10. Fabianski - nicknamed flappy by our fans for a reason (flapped at crosses). I never had any faith in him when he played, made nervous and was very error prone. Only makes this list as Almunia, Wright and Taylor were even worse. Fabianski did however improve dramatically after leaving us and turned out to be a solid PL keeper

1. Lehmann - a little underrated I feel, not in the top bracket of Premiership keepers, but still a great goalkeeper, massive character too...my personal fav.

2. Seaman - what can you say, an absolute icon in his position and at this club, seems a great bloke too as I loved him on "They Think It's All Over" ...only reason he isn't my number 1 is because I missed his prime in the 1990s.

3. Szczesny - my boy...I remember after we beat Barcelona in 2011, I felt Wilshere and Woj were gonna be the captain and vice captain of Arsenal for like a decade...shame it never quite worked out, but glad he won silverware here, another great character too...was up and down during his time here, but when he was on form he was amazing.

4. Leno - a bit like Woj really, up and down, but when on form he is quality...not quite the personality of Szcz though.

5. Martinez - a little overrated at this point, but had a wonderful ending with us, great story.

6. Ospina - didn't really rate him, but my girlfriend does, so I will put him here I guess...used to annoy her by comparing him to the "The plane" guy from Fantasy Island, because it looked like David had no neck

7. Fabianski - again, didn't really rate him...but helped us end the trophy drought so will be grateful, even if he nearly ****ed up right at the end in the final.

...can't really think of any others that I could put in...Cech was terrible for us and I hated him, while I celebrated the day Almunia left the club (Manuel seemed a decent bloke at least) no one else really had a significant period in nets in my time...so will leave it at lucky number seven!
Last edited: Jan 9, 2021

Rúnarsson in Arsenal is actually my top3 worst nightmare alongside the dream when Kylie Jenner left me and then the delirium, hallucination, and nightmares I had at hospital during my covid and pneumonia where the doctors and the nurses were killing me with swords so they could steal my life force that was made up by gold particles and red particles.

hydrofluoric acid said:
Rúnarsson in Arsenal is actually my top3 worst nightmare alongside the dream when Kylie Jenner left me and then the delirium, hallucination, and nightmares I had at hospital during my covid and pneumonia where the doctors and the nurses were killing me with swords so they could steal my life force that was made up by gold particles and red particles.
Click to expand...

Trusted ✔️
Could just about name 10 Arsenal goal keepers and I hated half of them. Almunia, Scez etc. Was glad when they gtfo.

Like Leno a lot though, he will be appreciated a lot more once he’s gone I think. Easily one of the better keepers we’ve signed.

Macho said:
Could just about name 10 Arsenal goal keepers and I hated half of them. Almunia, Scez etc. Was glad when they gtfo.

Like Leno a lot though, he will be appreciated a lot more once he’s gone I think. Easily one of the better keepers we’ve signed.
Click to expand...

Why were you happy when Woj left, my dude?

As good as Lehmann was for us he was also so frustrating/annoying at the time, remember when he used to manhandle opposition players on corners, he was just angry all the time.

When we had Lehmann I recall still thinking at the time we needed an upgrade in that department.

Riou said:
Why were you happy when Woj left, my dude?
Click to expand...

Szczney seemed like he didn’t take it seriously tbh. Always acting a fool, being silly and doing weird sh*t in games. You could see his potential but he needed someone to set him straight instead of being a clown.

BigPoppaPump said:
Szczney seemed like he didn’t take it seriously tbh. Always acting a fool, being silly and doing weird sh*t in games. You could see his potential but he needed someone to set him straight instead of being a clown.
Click to expand...

I was never really a fan. Glad he’s doing well now though.

1. Seaman - by a mile. Even past his best he pulled off saves like the Sheff Utd semi, best save I've seen live. An absolute unit in goals, intimidating, the prototype of what a keeper should be.

2. Lehmann - loved Jens. Solid, confident and made some amazing saves, solskjaer at old Trafford 06 stands out. Some rash moments latterly which started to cost us but will always love him.

Depressing list after those 2, could be argued we've never replaced Jens properly.

3. Martinez - short sample as a starter but he's the most confident I've felt with a keeper since Jens. Good on the ball for the modern keeper, a presence who can claim a cross and vocal with his defence. They looked visibly more confident with him in the sticks. Has proven himself further with Villa with the most clean sheets so far this season.

4. Leno - has been solid and improving this season as well. Excellent shot stopper and easy to forget how he kept us from some tankings in Emery's last season. Lacks the imposing stature I like in a keeper but he's definitely improving on his ability to catch crosses lately. Hopefully will end up 3rd on list by time his Arsenal career is done.

5. Cech - was delighted when we signed him but then he made that howler against West Ham and looked like Chelsea had done it again to us. Was immense versus Bayern though and had a decent season but safe to say he was past his best with us. Not his fault we started playing out from the back, clearly didn't suit him.

6. Szczesny - had all the potential but would never have fulfilled it unless he had that loan spell at Roma. Humbled him I think. Tainted a bit for me in that he was keeper in a number of games against the top sides where we got smashed 8-2, 6-3, 6-0, 5-1, granted not all his fault. Had some good moments for us as well, Di Natale pen away at Udinese is the first that comes to mind.

7. Manninger - just as I was really getting to see most games I remember him having a great run when Seaman was injured including a shoot out at West Ham. Apparently never had the mentality for the Arsenal dressing room at the time as he was very emotional but carved out a decent career in Serie A.

8. Fabianski - was never confident with him and didn't rate him but I'll put him here for the Wigan shoot out win. Has had a great career with Swansea and West Ham since though.

9. Ospina - looked decent to start with and seems to have cemented his place at Napoli since but made a number of high profile errors for us.

will never forgive him for the Barca final. To be fair he should never have been a number 1 goalie for Arsenal and was one of Wenger's biggest failings in the Emirates era.

No one can argue with Seaman at number 1 and probably Lehmann at no.2 but I'd put both Wilson and Jennings in the Top 5.

Agree with those four. Lukic would be fifth. Yes, I’m old too.

👳‍♂️ Figuring out how to delete my account 👳‍♂️

No one can argue with Seaman at number 1 and probably Lehmann at no.2 but I'd put both Wilson and Jennings in the Top 5.
Click to expand...

I’m young but I know Jennings and Wilson should be up there regardless. ****ing embarrassing from some posters on here. Know our history.

Administrator
You all forgot this guy 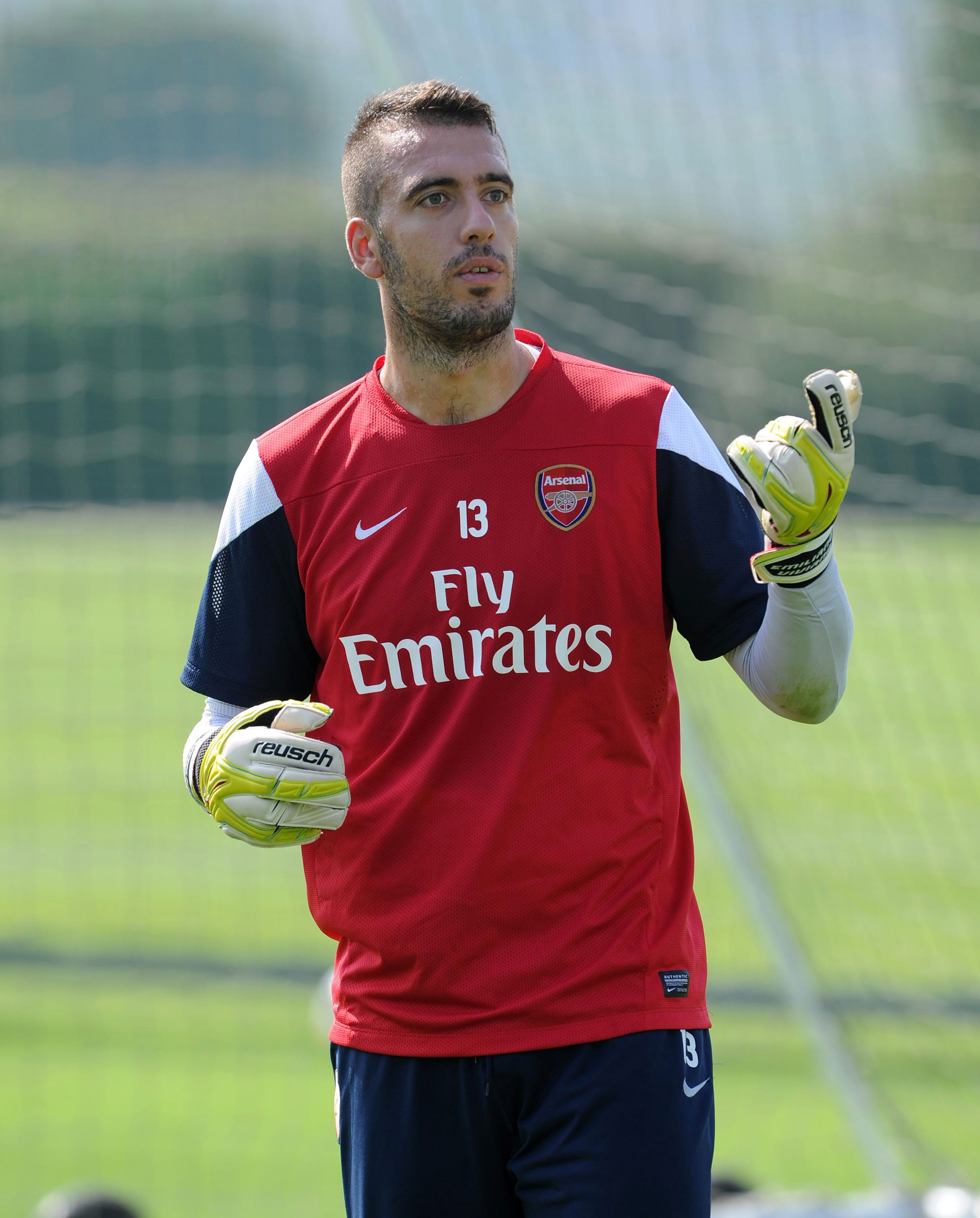 The rest...
You must log in or register to reply here.