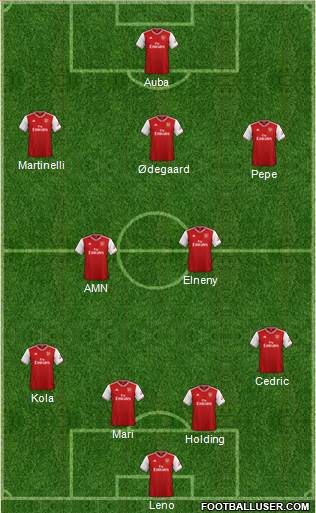 Leeds have Bamford injured, and Phillips has been injured and didn't play at all against Wolves. Surely he won't play much in the cup against us. Ayling, Koch and Firpo are injured too. They also have only 3 days to the game.

We have 4 days since our last game, and have 4 days to the next game, and then there will be an international break. I hope Arteta wants to keep our momentum going, and doesn't rotate too much.

I would say Pepe in, as the quality doesn't drop too much. Maybe give Saka a break, he has been hit a lot recently etc. Holding could also play, Gabriel has been very good and is our clear LCB, so he could rest, but CB's don't get too much strain.

Maybe Martinelli for ESR and so on. Ødegaard in too.

I want good Cup runs or trophies without Europe, even if this is the worst cup.
Last edited: Oct 23, 2021

Still love that a Northern Irishman was the player to score the winner, the last team we won this stupid cup

Trusted ✔️
Didn't realise this was midweek. As long as we're still in it we may as well try and win it.

Moderator
@Oxeki your lineup graphics never show up for me

Our best chance of a trophy. We won't need our best XI to win this, whatever that might be, as they won't have theirs.

Be good to start Martinelli and give some minutes to the likes of Kolasinac and Cedric, after all they are being paid. Nketiah if he is around and Balogun should also feature and AMN needs game time. Holding is going to get rusty too.

Martinez can start in goal.

I say we keep white and Gabriel starting, want to build up that relationship as much as possible. It’s starting to look decent and the more game time between them the better.

During the loan negotiation for Pennant...

Leeds: "Do you want us to put in a clause, so he can't play against Arsenal?"

Arsenal: "Nah, you're alright...let him play, won't make a difference."

American_Gooner said:
@Oxeki your lineup graphics never show up for me
Click to expand...

You're the mod, man!

Tom Mix said:
Our best chance of a trophy. We won't need our best XI to win this, whatever that might be, as they won't have theirs.
Click to expand...

City will still win it.

Expect Bielsa to put out some kids so we can win rather easily. After the game Arteta will try to claim that the win is relevant. He will most probably use zero players from the U23 team btw.
M

Given Leeds' poor league start and injuries, this game is probably not a priority for them and we'll be facing a very weak squad.

Would expect we only see 3-4 guys from yesterday's starters for us also. Would assume Leno and a Holding-Mari CB partnership, plus Pepe and Lacazette starting. Probably AMN starting also.

I would do this:

But feel Mikel will play mari for sure.

But feel Mikel will play mari for sure.
Click to expand...

We should win this cup! Easiest..

Leno (Ugh)
Chambers Holding Mari Tavares
AMN Lokonga
Pepe Ødegaard Martinelli
Nketiah
​
A mix of realism and what I want, I'd rather not see Mari and go with Cedric RB with Chambers partnering Holding but Mik will insist on his left footed LCB. If I see Elneny I will pay no attention to this match at all. I think Balogun is way too far down the pecking order to be considered. Ødegaard needs a good performance in this one and the three forwards all have something to prove.
Threadmarks
You must log in or register to reply here.