...still can't believe he was our actual striker sometimes.


...still can't believe he was our actual striker sometimes.
Click to expand...

We'd never be able to afford him in today's market.

Would they come though? no, Henry was a WC winner by this point iirc. He was branded a flop at Juventus by the British media as well, which was far from the case. Maybe to further sensatialise his ascension to one of the top strikers I don't know.


...still can't believe he was our actual striker sometimes.
Click to expand...

I find this more fitting

I loved them honestly. Wish they were both still connected to the club.


Player: Saliba
I spend a lot of time watching old training videos getting ideas for things to mess about with when I'm having a kick about and Thierry is right up there with guys like Zlatan and Marcelo for some of the most outrageous little warmup tricks you'll ever see. I've been having a lot of fun trying some of the little tricks the birthday boy used to get up to and I feel like everyone has tried the fake pass and the flick up volley against Utd. I didn't just love watching him play for us but he always inspired me and still does to get on the ball and try something. 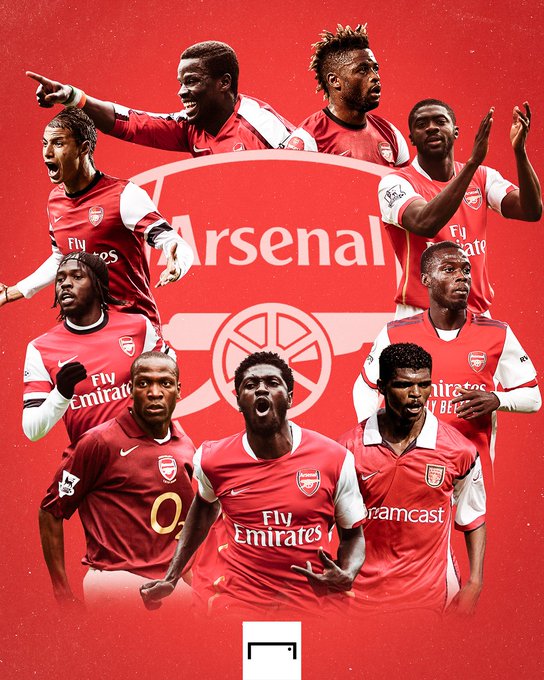 ...my man Chamakh made the cover but not Auba, was Arteta the lead designer on this?

Emi saving a pen, only for Zaha to score the rebound and then tell him to **** off...

Instead of bringing Tubbymans from Leicester to The Carpet, can we just bring King Kolo back as a coach from that sinking ship instead?

Must say I am impressed with Martin Keown as a pundit. Really well spoken and clear headed although you can sense a passion and at times anger underneath. One man I think one should not pick a fight with!

Must say Auba always looks a bit disheveled. Like he has been sleeping under a bridge. Laca though, proper groomed metrosexual...

...this guy was just a legend

...these two under Arsène

Trusted ⭐
Glad to see OG still contributing to Milan. He's probably the most underrated, abused strikers to play for us.


Player: Zinchenko
Seemingly real. Horrible.
You must log in or register to reply here.

Dennis Bergkamp is the club's unconditional idol, a perfectionist whom I never saw make a careless technical move.