No need to draw any conclusion from this i guess. Just a cardio session.

Guy was just injured and played a fitness game and his suddenly ****? Didnt he have like 20+ g/ass last season
B

Based on the video, he is taking up ode position?

bakaboo said:
Based on the video, he is taking up ode position?
Click to expand...

Nothing special from him so far.

Gunners1616 said:
No need to draw any conclusion from this i guess. Just a cardio session.

Yeah I do agree, what kinda frustrated me was that he looks hella slow and seems to wait until he's under pressure to make simple passes, but obviously can't draw much from it as he's probably nowhere near match fit.

Liked his rotations with Smith Rowe, you can see the positional discipline at play which is a good start.

Likes to cut in and get involved in midfield, which shows he can rotate with Ødegaard in our other competitions. Combined with his close control makes him an option in the final third in that right halfspace.

Will settle more with game time, but looks a decent player.
I

honestly , i think judge him in both negative or positve ways basing from yesterday don't have much sense , considering the level of the match and fact he just back from injury . i prefer analyse his performances of last years matches in Porto till now and wait that he will have chances in Arsenal team. my impression, watching some 21/22 Porto matches are positives ; he is potential big talent but he would need a lot of time for adapt to PL physicality and level ; of course the injury that he had in the summer slow down all the process

Trusted ⭐
It's literally his first pre season game, without a pre season and people are giving him ****. Wow.

Trusted ⭐
Don’t want to say we’ve been fleeced but you have to say so far it looks like it. Pretty concerned.

Those (seriously) having a go at him; seek counseling.

Gunners1616 said:
No need to draw any conclusion from this i guess. Just a cardio session.

@55s in - did he intentionally control a ball with his crotch? Odd technique that…

Is that Xhaka at the back behind arteta?

bakaboo said:
Based on the video, he is taking up ode position?
Click to expand...

Looks like it
Looked similar, even in terms of overplaying it in the final third. Needs to be more decisive in the PL… as does Ødegaard.

We don't care about the player tbh, all we won't is to prove @GDeep™ wrong

db10_therza said:
@55s in - did he intentionally control a ball with his crotch? Odd technique that…


Is that Xhaka at the back behind arteta?
Click to expand...

OnlyOne said:
Don’t want to say we’ve been fleeced but you have to say so far it looks like it. Pretty concerned.
Click to expand...

You don't have a clue about football, if you are concerned about his first game after an injury. He had literally no pre season. Let him have a couple of months without injuries and see where he is.

Anders Harbo said:
You don't have a clue about football, if you are concerned about his first game after an injury. He had literally no pre season. Let him have a couple of months without injuries and see where he is.
Click to expand...

Just my opinion Haribo. We bought him for half of what Haaland costs and nearly half of what Nunez cost. He's been injured since he joined.

OnlyOne said:
Just my opinion Haribo. We bought him for half of what Haaland costs and nearly half of what Nunez cost. He's been injured since he joined.
Click to expand...

But it’s a useless opinion nevertheless. Let’s see in a month or two. 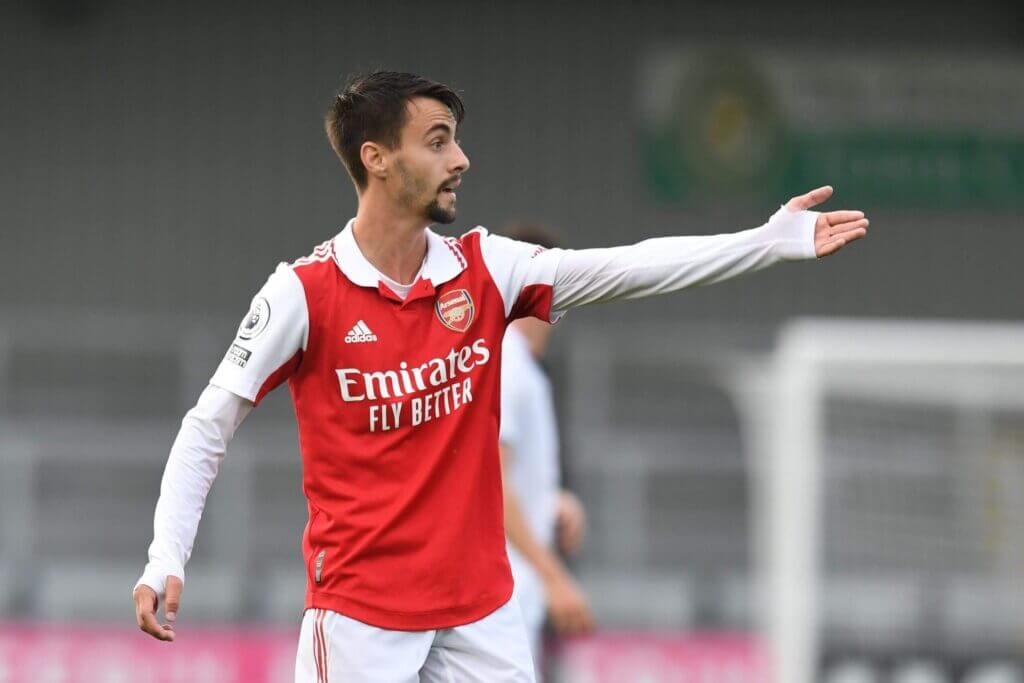 A first look at Fabio Vieira in Arsenal colours

The attacking midfielder, signed from Porto this summer, made his first competitive Arsenal appearance in an under-21 game against Swansea

As was the case with Marquinhos at the start of the month, Mikel Arteta made the trip to Meadow Park to watch another one of his summer signings’ first competitive minutes in Arsenal colours.

Fabio Vieira started for Arsenal’s under-21s in their 2-1 Premier League Cup win over Swansea City alongside Emile Smith Rowe and Cedric, with the club continuing to use Mehmet Ali’s development side to help first-team players gain fitness.

Lining up in the 4-3-3 system Ali is becoming familiar with, Smith Rowe was used on the right of a midfield three and Vieira played off the right wing following guidance from Arteta’s staff.

That is the position in which Vieira first broke into the Porto team during the 2019-20 season. The dynamics were slightly different, as his old team deployed a 4-4-2 formation rather than a 4-3-3, but he was still given the freedom to roam and influence the game how he saw fit as a wide playmaker instead of playing as a more traditional touchline winger. 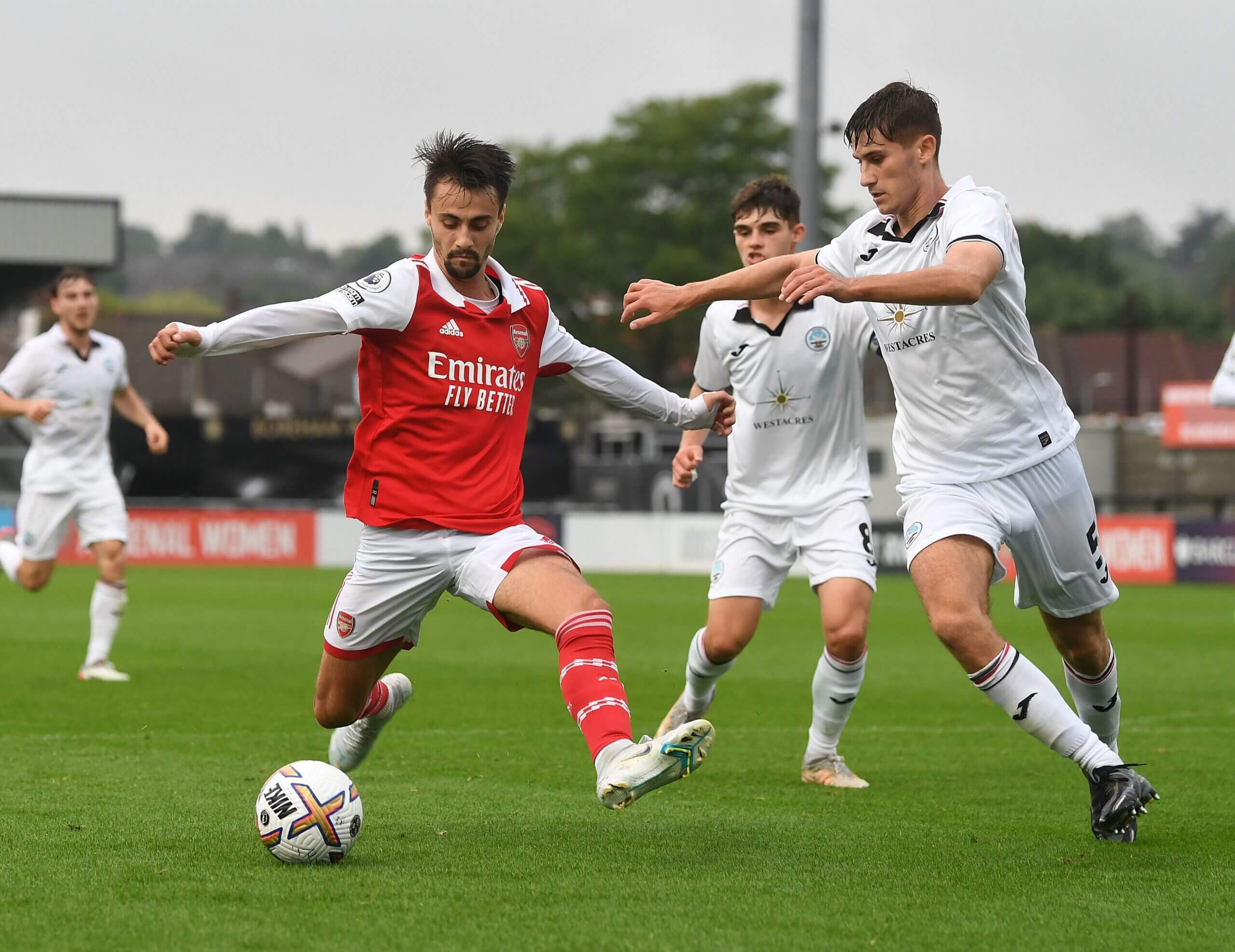 The Portugal Under-21 international played 45 minutes against Swansea, as did Smith Rowe, and despite not having as an electrifying introduction as fellow summer recruit Marquinhos, who scored three times in the opening two games of the season for the under-21s, Vieira held his own.

“I thought he had some really good moments. It wasn’t easy to break Swansea down when they had 11 men on the pitch,” Ali said post-match.

“He had a really good blend of threatening in behind but also coming into clever pockets; coming deeper to get the ball to feet. I thought he mixed that up really well and that’s what we wanted from him: to get on the ball and cause problems. I felt he created a few good chances and had some opportunities to score as well.”

During Vieira’s first half of football in north London, there were a few common themes that arose.

The first was that the former Porto man appears very technically sound. Whether it was controlling aerial passes toward him or retaining possession in tight spaces, the 22-year-old was very comfortable on the ball.


It was also clear on multiple occasions that Vieira could very quickly see the picture in front of him. Slid in by Smith Rowe, he quickly checked back onto his left foot, teasing his marker to slide past him and then lifted the ball to the back post expecting a runner to knock it in, albeit no Arsenal team-mate had made the required movement.

As was to be expected, he had a bigger impact on the game when he got on the ball in the right half-space than when facing a defender in a one-v-one. Vieira still tried to get around his opposite number where possible, but when he was forced onto his right foot, he couldn’t quite make that burst past a marker or had tame shots deflected behind for corners.

Early on, he clipped a lovely ball into the box for Smith Rowe to chase and cut across the six-yard box, leading to Arsenal having blocked two shots. Off the ball, he also drifted into those spaces to receive from Miguel Azeez — who performed well, looking sharper on and off the ball at the base of midfield — and also break into the final third.

Playing near Smith Rowe, the pair combined well in the first half. At times they switched positions, so Vieira was on the inside and Smith Rowe was on the touchline, and at others, they would trade quick one-touch passes to work their way upfield, which was beneficial against a rigid defensive shape. The tidiness of their combinations was encouraging given how the first team have started playing with more freedom within their structure, particularly by playing off instinct more in the final third since the arrival of Gabriel Jesus.

“The first-team staff will guide what they want from those players,” Ali added.

“You had Cedric at right-back, Emile (Smith Rowe) and Fabio (Vieira) in the first half. They’re top players, so the information we’re giving them is very limited. They’ve got a real licence to be fluid and play off each other because they do it every single day.” 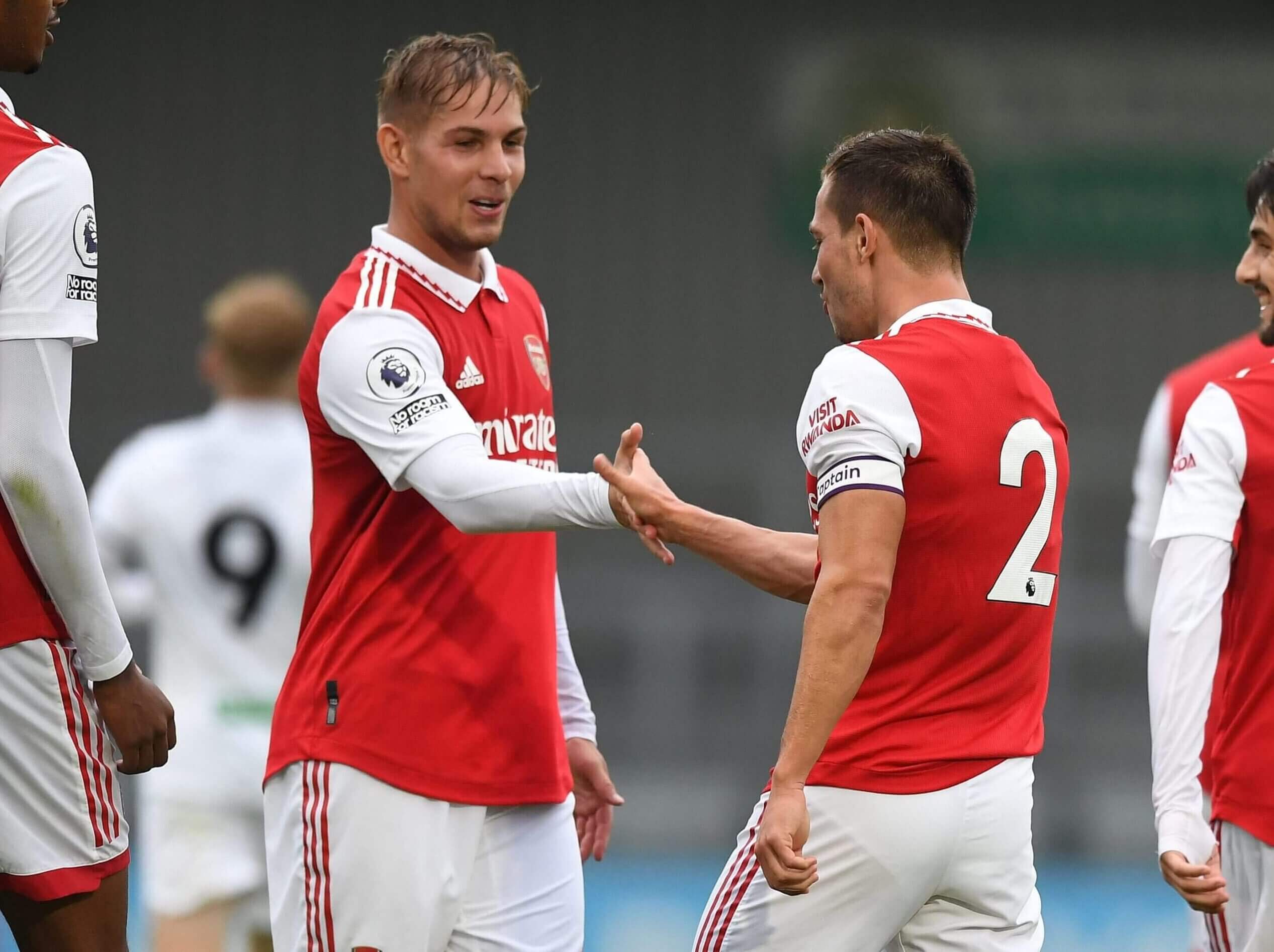 There was a moment late in the first half where that fluidity was apparent, with Smith Rowe drifting further left to overload that side while Vieira moved more central. The England international lifted the ball to the onrushing Lino Sousa — who had another impressive performance — and cut back for Vieira but, with the ball on the bounce, the Portuguese midfielder could not control his volley well enough.

Interestingly, despite making his first appearance for Arsenal on the right, it would not be smart to pigeonhole Vieira to just that position. He grew into a No 10 at Porto and as recently as after the weekend’s 4-2 win over Leicester City, Arteta mentioned him as an option (yet with a different profile) for the Granit Xhaka role as Arsenal’s left-sided No 8, saying: “Granit has certain characteristics and we can develop other characteristics because he has the ability to do it.

“When Fabio Vieira plays in that position, he’ll have a different role because his qualities are different and Martin (Ødegaard) as well. The team has to adapt but the players as well have to have an eye for goal if they’re playing there, and the feeling that, ‘I want to score’.”

Vieira’s Arsenal career will not be defined by a 45-minute cameo for the under-21s. It was not a groundbreaking introduction, but it was a solid-enough first outing for the midfielder and something tangible to build on over the coming weeks as he gets closer to a first-team debut.
You must log in or register to reply here.