Granit Xhaka: Xhak Of All Trades


Player: Xhaka
@Mrs Bergkamp, why the red card? I am glad to see such a good poster as @BergMan back
in the forum. He is a very good poster, not only in this thread but in all Arsenal related threads and a true Arsenal fan based on his posts. I think he was bullied for no reason by those who like to bully people when they feel they are beaten.

Erlis said:
@Mrs Bergkamp, why the red card? I am glad to see such a good poster as @BergMan back
in the forum. He is a very good poster, not only in this thread but in all Arsenal related threads and a true Arsenal fan based on his posts. I think he was bullied for no reason by those who like to bully people when they feel they are beaten.
Click to expand...

The red cards are how you and I show each other love. I've never bullied Manberg. Once I know which name he's using, I stay well clear although I did reply in the early days. Enjoy your evening and the match tomorrow


Player: Xhaka
Enjoy the match you too. Hope the tables turn in our favour. That is what matters at the end of the day.#

P.S. I do not remember when I have given you a red card last but anywayz.

Hopefully this is Xhaka's last game but we know he won't ever leave, he'll be here in 2030 getting red cards.

Dusted 🔻
City buy the title again. Congratulations on money well spent. Lol at Liverpool and Carragher. I hope Madrid batter you. So happy this season is over.

Xhaka likely our most consistent player this season. Should he be a starter next year — I don’t think so. Doesn’t discredit his effort and leadership, I just think we need different at the position.

Got a standing ovation coming off today. Had to check myself and sit back down. Na, only kidding. He deserved it.

2 FA cups (played really well in both finals)
2 Community Shields (something losers like Kane and Son couldn't even qualify for!)
Quality captain for the club (before plane protests and fans ranting on social media, brought him down...)
Finally won an Arsenal player of the month award this season.
And even won our ****s of supporters round this year too.

Really good year for Granit, he has done you proud @Erlis


Player: Xhaka
I am always happy with Granit tbh, but I wish he had achieved more with Arsenal because I think he deserved it.

By end of next season he will have made his 300-th appearance, thus qualifying for a testimonial. @Macho knew

albakos said:
By end of next season he will have made his 300-th appearance, thus qualifying for a testimonial. @Macho knew

I just can’t warm to him. Think the damage is done to be honest. 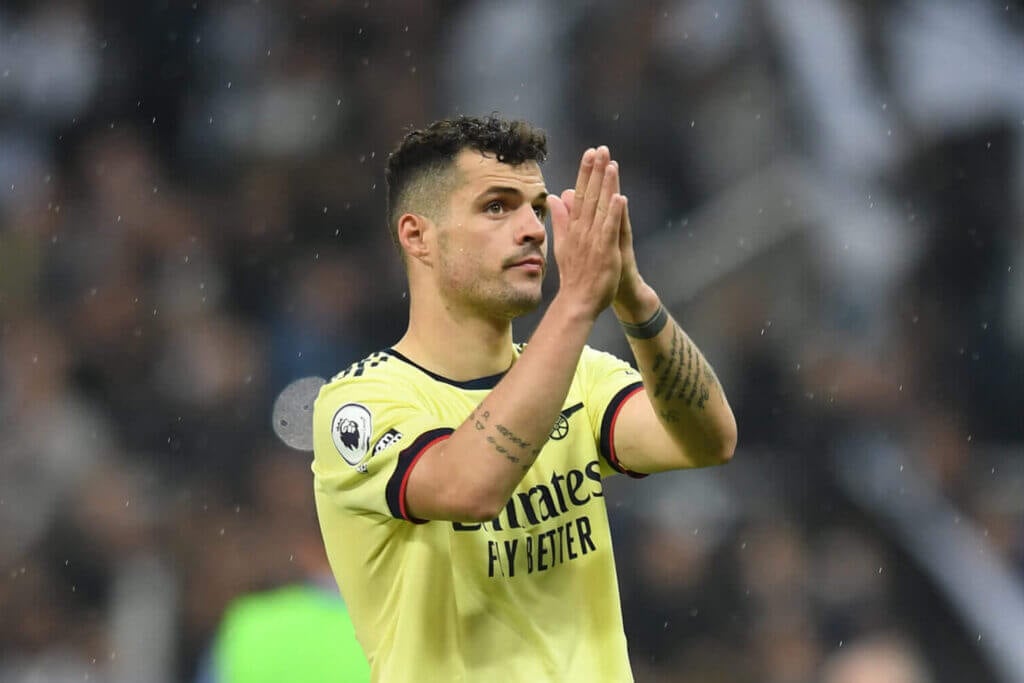 Will Xhaka walk away this summer?

After the Newcastle defeat, Xhaka's emotions were on full display - so what now for the midfielder? Is it his moment to leave Arsenal?

Arsenal and Xhaka: Will the midfielder walk away this summer?​

In the immediate aftermath of Arsenal’s 2-0 defeat at Newcastle, a result that took Arsenal’s top-four fate out of their own hands, Granit Xhaka was understandably emotional. His post-match interview suggested a cocktail of disappointment, frustration and regret. He was hurting.

It wasn’t supposed to be like this. Arsenal have not qualified for the Champions League since Xhaka arrived in the summer of 2016. In the intervening six years, the 29-year-old has been a liability, a leader, and practically everything in between. The season’s climax was supposed to be the crowning moment in his redemption arc.

And, perhaps, a chance to leave on a high? Xhaka is coming to the end of two seasons of fairly consistent performance — his stock at Arsenal is as high as it has ever been. Speaking in April, he said he would only want to leave Arsenal having achieved “something special”. Perhaps restoring the club to the Champions League, a competition they qualified for 19 years consecutively before his arrival, might have been his cue to ride off into the sunset.

This is not to cast aspersions on Xhaka’s commitment to Arsenal, or indeed manager Mikel Arteta. It was the Spaniard who persuaded him to stay at Arsenal when he first arrived in the winter of 2020. “Mikel and I are very close,” Xhaka admitted earlier this season. “When he came two years ago he told me exactly what I wanted to hear. I was missing a coach like him, very warm and open with clear ideas and he is always behind me no matter what people were saying about me.”

Arteta’s conversations with Xhaka were also critical in the Switzerland international choosing to stay at the club last summer after Arsenal fielded bids from Roma. In the end, Arsenal exercised an option to extend Xhaka’s contract by a further year until 2024. 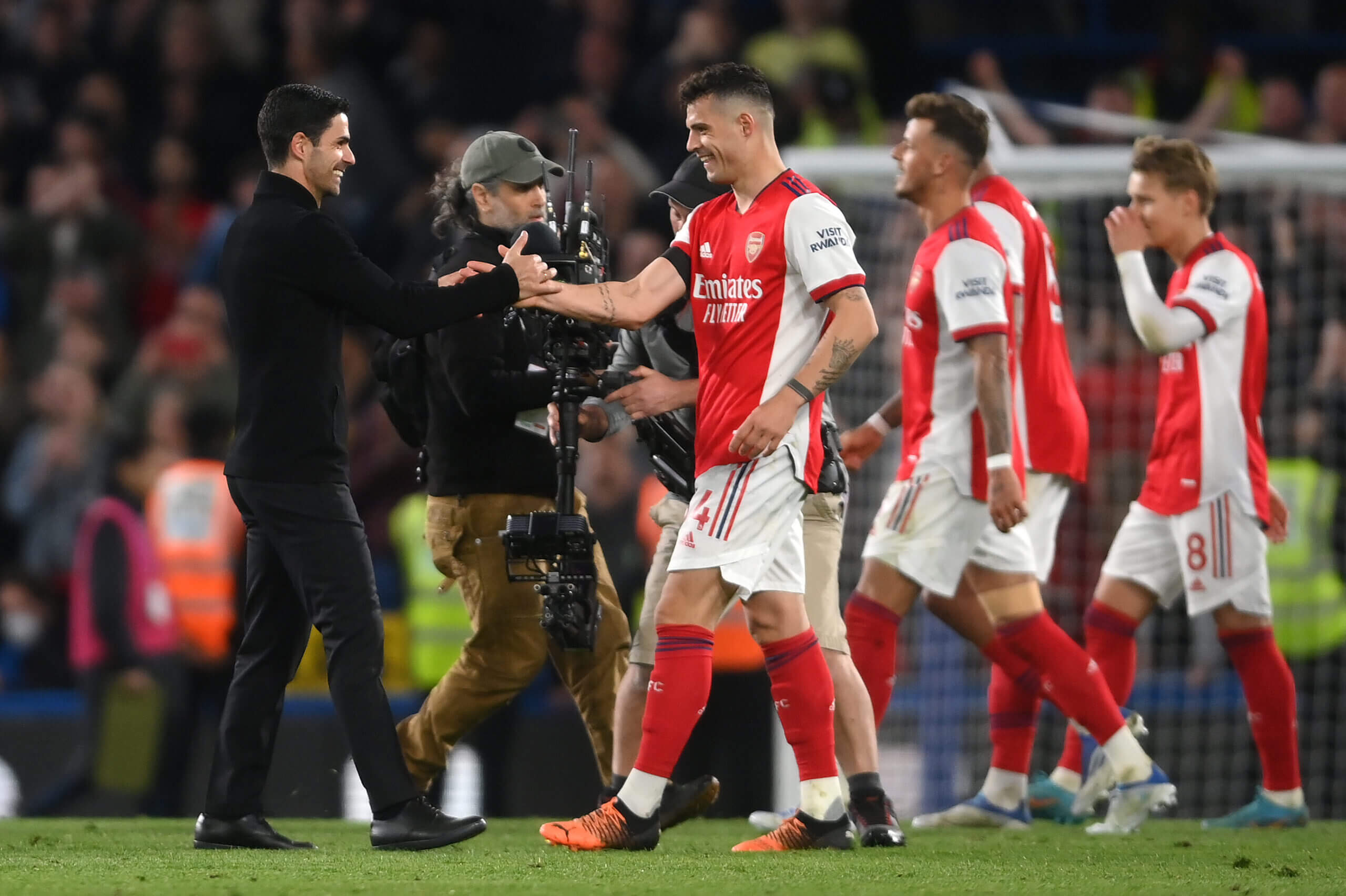 Arteta and Xhaka have always been close (Photo: Mike Hewitt/Getty Images)
But Xhaka is 29 now and will be 30 early next season. His interest in a move to Roma last year appeared more than just a mere flirtation. If he is serious about experiencing a new challenge, a new environment — and earning a long-term contract that will carry him into his mid-30s — this may be the right time.

For Arsenal, too, there is an economic argument to sell. Arsenal paid a fee of around £35 million to sign Xhaka in 2016, and this is most likely their last chance to recoup a sizeable sum for the player. At his age, in good form, and with two years remaining on his contract, his value may never be the same again. Arsenal have a poor track record when it comes to recouping revenue through player sales — perhaps this could be an opportunity for them to be ruthless.

It’s hard to imagine Arteta would want to lose Xhaka. He is a key member of his team — when he is fit, he plays. Arteta is attempting to build something at Arsenal, so losing one of his first-choice midfielders would be far from ideal. Arsenal will also be appointing a new captain this summer. It won’t be Xhaka, but he remains an influential voice in the dressing room.

There is, however, a slight sense that the team is evolving beyond Xhaka. In the second half of the season, Arsenal have tended to operate with more of a 4-3-3 shape. When fit, Thomas Partey has taken over playmaking responsibilities at the base of the midfield. Xhaka has been playing in a more advanced role, more akin to a No 8. He has played well, but are there alternatives out there who are better suited to his new responsibilities? Almost certainly.

There’s no doubt Xhaka’s presence, on and off the field, would be missed at Arsenal. Arteta is in no doubt about what he offers: “If every fan, or individual spent five, 10 minutes with Granit — even two minutes — they will understand the person he is, the professional that he is and how much he cares about the club.”

Externally, he is subject to more criticism. Even his post-Newcastle interview saw him become the subject of Gary Neville’s ire on Sky’s television broadcast. In his pre-Everton press conference, Arteta downplayed it: “When you allow people to speak in front of the media you have to allow them to say what they feel. Unquestionably, knowing Granit, that’s what he felt.”


And that seems fair enough. We put a lot of stock in what athletes say in the emotionally fraught moments immediately after they’ve spent 90 minutes running around. They are dehydrated, exhausted and, in this case, upset. When Xhaka volunteered to speak to the media on Monday night, the Arsenal press officer would have known the likely outcome. At least he had the courage to do it.

When Xhaka does things, they make more headlines. He has a reputation in England that he is constantly battling against. It certainly seems that way with referees. The question is whether that is a stigma Arsenal are prepared to carry? Do the good things Xhaka offers make up for the baggage he carries?

Steadily, Xhaka has rebuilt his reputation at Arsenal. Most fans have come to respect him as a person — and, by and large, as a player.

Now he faces a choice: does he want to stay at Arsenal, to help lead the younger generation back into Europe? Or does the reconciliation mean he can now walk away with his head held high?

albakos said:
By end of next season he will have made his 300-th appearance, thus qualifying for a testimonial. @Macho knew

Think he'll reach all time top 3 apps for us before he leaves due to his exceptional fitness.

He's actually a legitimate candidate for our player of the season, what a turnaround for him

If he actually headbutted Dele Alli yesterday, he would have pipped Saka to that award for me.

Nobody laughs on my "jokes" 😫

Riou said:
He's actually a legitimate candidate for our player of the season, what a turnaround for him

If he actually headbutted Dele Alli yesterday, he would have pipped Saka to that award for me.
Click to expand...

So violence and not his footballing ability is what you rate now? Interesting.


Player: Zinchenko
You must log in or register to reply here.

I've got the best goalkeeper and the best centre half. All I need are the best wingers and the best forward. It doesnt matter what the rest are like.