Real Sociedad up at HT, while Seville draw.

Betis had the goal in the last action of the match...Montoya totally lost his composure. He needed to just leave it with a simple touch to the middle where he had a teammate who could've placed it in easily.

2-1 Barca at HT against Getafe.

Cadiz and Rayo up at HT.

Atletico 0-0 at HT against Villarreal.

Trusted ⭐
Ah Classic Don Emery f**k up. not sure how they were winning this game they got like 2-3 chances all games it's like watching his time here conceding many chances and score from limited chances we got. 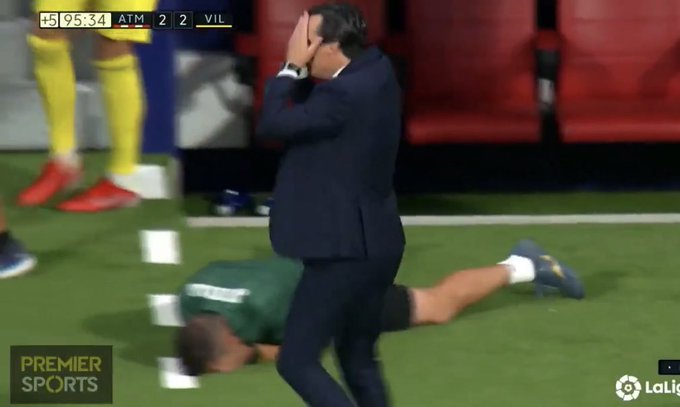 UnitedBeard said:
After watching Brazil in Copa America almost every matches, I have to say Casemiro is not liability on the ball. The guy is better than Ndidi, Rice, Kante, or even Partey on the ball. He can actually pass, make long ball, he has good shooting technique, he even made some crazy good flick or back heel through ball in Copa America (one of them in the video below at 3:23).

He didn't show it much at Real because he had Modric and Kroos in front of him to do the job. But if he is being asked to dictate the tempo like deep playmaker, he can do it. He's not as good as Alonso, Carrick, Jorginho, and Busquets but he offers more on the ball than Camavinga. Rennes fans posted on Red Cafe that Camavinga's passing is not really what he is good at, he said Camavinga is good at dribbling, defensive aspects, and work rate. Camavinga is more like Edgar Davids IMO.

Ndidi and Kantè is a very low bar. Better than Rice I don't know, and better than Partey no, they are different styles, he's got a bit more passing range when he has time on the ball, but Partey is far more composed and press resistant.

Casemiro absolutely is not capable of doing the job of a deep lying playmaker. You're talking about a player I've watched 100s of matches for Madrid...a couple Copa América matches isn't going to change my opinion haha.

Every Madrid set-up since Casemiro has come into the team has been about getting Kroos or Modric on the ball in the build-up and hiding Casemiro in the construction phase. This is for a reason.

Telling a Madridista that Casemiro is good on the ball and has the ability to be a deep lying playmaker is like telling an Arsenal fan Cédric is a good defender, or Xhaka is press resistant. It doesn't pass, everyone knows what type of player Casemiro is at this point. We've all seen his limitations on the ball for years and years, especially when the game speeds up and he has to make a lot of decisions. He's a top level footballer, of course he can ping passes around and show some decent skills at the very low pace of the Copa América.

Yeah, Camavinga's passing is a work in progress (though there's a level of promise there) and he's certainly not a DLP either. But his technical ability and comfort on the ball, and especially press resistance, far supersedes Casemiro's.

Levante up at HT against Rayo

It’s not impossible to go through a season unbeaten and I can’t see why it’s shocking to say that.