Rex Banter said:
Obviously if he gets us top 4 you hire him but I don’t know if it’s a given.
Click to expand...

He'd have us top four the year after minimum.

Rex Banter said:
Thats what I mean. Is he still the dream candidate if he doesn’t get over the line and continues this “big game Brenda” narrative?

Or do you say because he’s raised the floor of that Leicester side to compete with the top 4 and they play good football then that’s enough?

I love your questions and by no means is he absolutely the perfect candidate. However, in terms of who else is out there he's a very strong choice.

End of the day though, Leicester in my opinion have no right to be where they have been the last couple of seasons but he's raised them that much they have been.

Trusted
Barnes, Perez, Vardy and Iheanacho. Rodgers has those lot terrifying defences every week. Imagine what he could do with Saka, Martinelli, Pepe and Aubameyang.

Tielemans is out of contract in 2023 as well.

OnlyOne said:
I love your questions and by no means is he absolutely the perfect candidate. However, in terms of who else is out there he's a very strong choice.

End of the day though, Leicester in my opinion have no right to be where they have been the last couple of seasons but he's raised them that much they have been.
Click to expand...

Very, very true. For me he’s not perfect but he’s probably the best we can do right now.

You’ve won me over bro

TinFish said:
Neither at Arsenal. Gnabry didn't create as much fuss at Arsenal compared to Martinelli.

I would compare Gnabry to Balogun at Arsenal currently.
Click to expand...

Not true at all the only question fans had with Gnabry was whether he could recover from multiple knee injuries.

They were also pissed when we gave him to Pulis.
J

Didn't realise Gaultier had worked with Aubameyang back at st etienne.

This guy is almost too perfect for arsenal.

Their shortlist includes Joachim Low as well
Click to expand...

I’d take either. Zidane would turn Guendouzi into a £150M player.
J

Moderator
Allegri would be a good choice it's the best we can get considering our position. But after yesterday PR from the media i don't think we'll change Arteta until maybe December

yousif_arsenal said:
But after yesterday PR from the media i don't think we'll change Arteta until maybe December
Click to expand... 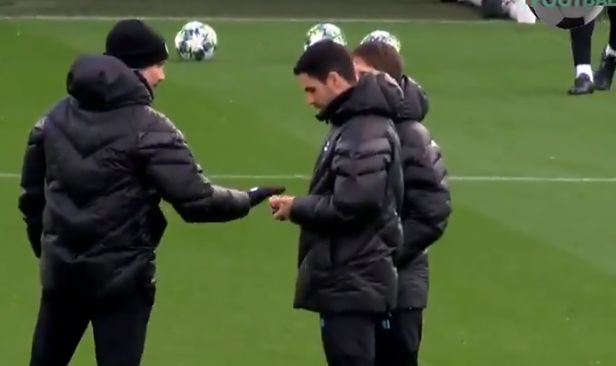 dashsnow17 said:
If we're looking at Lille, surely Campos is the person we need?
Click to expand...

Campos left Lille a few months ago. He is a FA now, so to speak.
On the Galtier conversation, it is rumored that he will go to Napoli next season.

You know what, why not hire a Rafa type, and tell him to just use our young guys and try to finish top 7.

That way the kids get developed, we get a young team, and we qualify for EL.
W

GDeep™ said:
You know what, why not hire a Rafa type, and tell him to just use our young guys and try to finish top 7.

That way the kids get developed, we get a young team, and we qualify for EL.
Click to expand...

i am all for it. at least would be much more intresting...

Gasperini doesn't want to leave Italy. He's one of my favourites but an unrealistic candidate by his own words.

OnlyOne said:
Who's going to get me hyped about this Lille manager, just seen they're about to win the league.
Click to expand...


isop said:
Watching Lille in Ligue 1 they play really nice football. They can control matches, structure their play with good combinations, everyone knows their job/role on the pitch, it's creative, pleasing on the eye, with passing options on the ball, good movement, and they are also defensively organized, its pretty good.

Galtier has done a very good job there, they were heading for relegation, he rescued them then took them into the top 4, and now he's three wins away from the title, if they can get over the line, in what has been a great title race in France involving 4 teams.

I heard on the Talksport Trans Euro Express show (great live radio/on demand podcast show by the way for insights into European and also South American football) that Galtier is traditionally a very gritty and defensive coach, but the Lille team I'm watching is more attacking than that. They said Bielsa almost ran this team into the ground. But I'm wondering if Bielsa's imprint is still there somehow.

As soon Bielsa he came in he basically did a clear out, some experienced guys and other players that didn't fit his style (e.g. the club captain and veteran Mavuba) were told to find new clubs, and he and Ocampos brought in some young, hungry, high stamina players that would fit in with Bielsa's approach, including our very own Nicolas Pepe. It didnt' work out for Bielsa, but the way they play right now, I'm wondering if the training that Bielsa sdid with them, the high pressing, high energy, run all day approach, excellent pass and move football has sort of been taken on by Galtier and refined with good defensive play as well.

Galtier is wanted by Lyon and Nice, and apparently he'd be open to a move. Lille are in financial trouble, and may need to sell off their talents to relieve debt, so maybe Galtier is thinking about how much longer he'll be able to keep them at the top if they have to asset strip the club. Nice's new owner is ambitious, the richest man in Britain, Radcliffe; they have a nice stadium and plans for the top. Lyon are one of the biggest clubs in France and can usually spend decent money and attract good players.

I considered Galtier as well, but when I heard on the Talksport Trans Euro Express that he was traditionally gritty and defensive, I was a bit more cautious. I don't want a situation like Monaco, where Jardim was usually a conservative manger, then he had a team with Bernardo Silva, Lemar, Fabinho, Mbappe, Bernard Mendy, Falcao, Bakayoko, Germain Sidibe etc all playing free-flowing, amazing football. The journalists asked him, what are you doing in training to make them play such great football, he said I don't know, I just let them play/express themselves, lol.

So maybe Galtier is like that, maybe the effect of Bielsa lingers on and he's allowing them to express themselves, taking advantage of Bielsa's training while adding good defensive and extra mentality, I don't know. Or maybe I'm doing him a disservice, but yeah, someone knowledgeable people on French football may be able to expand on it.
Click to expand...

carlito'sway said:
Good post and fair comments here. I agree about Galtier. He is surprising me as well. He was indeed a pretty defensive minded manager but having said that it think it was more a matter of the players he had at his disposal. With this Lille team, he is spoiled with talent and while he is not playing possession football, his team is very well structured, attack minded and play of the strengths of his attacking players (speed, fast transitions, technical skills). He is really having a great season.
One thing about Galtier, forwards tend to progress with him. He did a lot for PEA when he was a St Etienne. Jonathan David is really doing well under him as well at LOSC. Having said that, he is playing next to a monster called Burak Yilmaz. I am awe looking him play at 35.
Click to expand...

Can you summarise in 5 bullet points? I am absolutely not reading all that. Thanks!

Arsenal could’ve had Allegri years ago, finally want him and his now on the Madrid shortlist.