Maybe said:
I mean, we've tried it all already, for sure there are gonna be some games where we will look decent, but most of the time it's gonna be a classic dead football served by Mikel. I understand you guys got excited after the Villa game, so it's gonna be sad to watch you guys being disappointed again later
Click to expand...

I’m defos not excited by Mikel

I know a loss or pathetic draw is never far away but I still want the team to win so this would hopefully be a way to do that.

<<reed>> said:
The guy was taking shots at the Arsenal fans for mocking him and his boy Arteta after beating mighty Villa and still sitting in the 2nd half of the table with a negative GD, nuff said
Click to expand...

Saw gunnerblog on Sky with Clive from ArsenalVision and Pippa from AFTV. Neville asked each of them what would be their priority out of changing the players, the manager or owner at Arsenal. Silly question but for most fans it's an obvious answer. Pippa said get rid of the owner straight away without hesitation. Gunnerblog was very reluctant to answer the question and ended up saying the players after umming and ahhing. Just another example he is such a lacky for the club and his relationships there.

MartiSaka said:
Gunnerblog was very reluctant to answer the question and ended up saying the players after umming and ahhing. Just another example he is such a lacky for the club and his relationships there.
Click to expand...

The reasoning was so dumb as well, saying that if you change the owners it'll only be so they can sign new players.

American_Gooner said:
The reasoning was so dumb as well, saying that if you change the owners it'll only be so they can sign new players.

Yep makes no sense.And he isn't thick either. He is trying to ensure he doesn't fray his relationship with the club who are giving him access for his journalism.

for reaction on posts. It would suit pictures of Scholes and his daughter + these kind of articles.

Macho said:
“We’ve got the youngest squad in the league” is the response you’ll get for that. For Mikel spending that money is still a handicap somehow.
Click to expand...

So they purposely bought bunch of young players and will bring it up every week? No one cares about how young they are. They either good enough or not 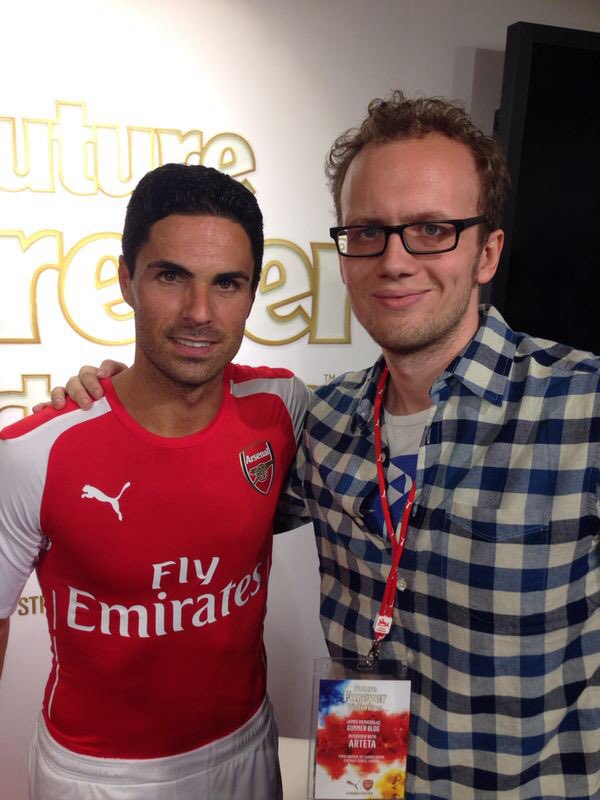 Proper nerd that. Who’s the guy on the right?

APierre said:
Proper nerd that. Who’s the guy on the right?
Click to expand...

Trusted ⭐
The youth stuff with the squad is great and all and I think as Arsenal fans we're probably conditioned to appreciate the nurturing of young talent and bringing them through into the first team more than most fanbases due to the great work Wenger did in they respect.

I don't want to be a downer because I love a lot of our younger players, but there's got to be a limit to how far you go with it. We've already got the second youngest squad on the league as it stands, I believe.

Realistically our backline is too young even though I like all 5 of them as talents, they're going to make mistakes that cost us points.

Saka and ESR are wonderful talents and I love them but I don't see ESR continuing to put out his current output for the rest of the season and Saka's number don't reflect how good a player he is at this stage of his development and that's totally natural. We do need to be creating more chances still.

Let's keep utilising the young talent we've got and watch them progress with game time but we can't be getting on this perpetual youth cycle. That's when youth becomes a bit of an excuse for a manager.

Maybe I'm being harsh but it's not like we're at the end of a great cycle filled with trophies where you can legitimately say 'Okay we take 3-4 years and rebuild again), we've been treading water ( or slowly drowning ) for 5+ years. There's got to be short term or instant progress, which generally comes from more experienced players as well as bringing the youngsters through.

MartiSaka said:
Yep makes no sense.And he isn't thick either. He is trying to ensure he doesn't fray his relationship with the club who are giving him access for his journalism.
Click to expand...

He’s what I think the main problem with journalism is today.

Sports journalism has now really only got room for two types of people. The reporter of news and the person who can give in depth tactical analysis.

Sporting institutions have realised they can put the squeeze on reporters with the death of the written press because of how people consume sports. If you starve a writer of access he’s pretty much done.

Now guys like Romano or Ornstein are the biggest names in journalism solely based on their contact book.

Gunnerblog knows as much about the game as you or I do tbh. He can’t give in depth tactical breakdowns so he has to rely on keeping the club sweet for his journalism career.

It’s access journalism and depressingly it seems to be the norm these days.

Something about this picture is putting me off.

Probably our worst kit ever.

Oxeki said:
Probably our worst kit ever.
Click to expand...

Shame too...that pic is from 14/15, which is our best season since the stadium move...but all the kits that year were horrendous, ffs.

Yeah, Mikel really putting over the youngest squad in the league thing, heard him say it a few times now....we will probably be hearing it alot this season.

He was talking about Auba getting back to his best this season today/yesterday, but still managed to squeeze that phrase in

Trusted ⭐
Threadmarks
You must log in or register to reply here.