I still can’t get over how negative you are when you’re leading 1-0. That is all down to the manager.

I actually think Arsenal have a very good first 11. Partey looks lost under Micky, Auba is better than he’s showing and there’s a decent player in Ben White. But the manager can’t get the best out of his players.

Obviously, we all (rivals) hope you back Arteta and stick with him for another 10 years but I think he will be sacked by May.

Riou said:
Still think we have enough player quality, to get Europa League, regardless of Arteta.

Sp**s and West Ham are decent, but nothing to overly fear, they are catchable.
Click to expand...

I have to disagree. The top 3 is set abd then you have West Ham, Utd and Sp**s. After them, Leicester and Villa are looking good. Who knows what Newcastle will do and how they will progress? We can't defend, we can't score and the midfield is where playing careers go to die. There's not a youngster with the personality of Cesc or Guendouzi to drag us along. They've all been neutered.

Tree Points said:
I still can’t get over how negative you are when you’re leading 1-0. That is all down to the manager.

I actually think Arsenal have a very good first 11. Partey looks lost under Micky, Auba is better than he’s showing and there’s a decent player in Ben White. But the manager can’t get the best out of his players.

Obviously, we all (rivals) hope you back Arteta and stick with him for another 10 years but I think he will be sacked by May.
Click to expand...

Trusted ⭐
'All or nothing' director hoping that although Arsenal fans won't want to watch the pain, there'll be enough opposition fans wanting a good laugh as Stan hangs on to his amateur management team in a cut throat world of professionals.

FinnGooner said:
I find this really baffling. Am I in some weird alternate reality? Arteta has no track record whatsoever as a manager. There is ZERO evidence that he's any good. But somehow it just seems to be OK for a lot of people that he is the manager of Arsenal FC. We might be on a away down but we're still a big club. There is no reason for an assistant coach to be our manager. Where does this utterly blind faith come from? Am I missing something? I know there are also critical voices towards him among the fan base but still, way too much acceptance. Everybody should be full on "Arteta out" at this point. Zero progress whatsoever in 3 years. It's insane for this to be OK to any fan. We've basically chained our entire club to a project to just see if Arteta can do a job as manager or is he just an assistant coach. This kind of projects belong to Tier 3 football league, not Arsenal FC.
Click to expand...

1. Replacing Emery with Arteta when Ancelotti was available.

2. Failing to replace Arteta after the disastrous run last November/December (when Tuchel was available).

3. Shocking indecision from the board to use both early season international breaks (October/November) to replace Arteta (this time when Conte was available).

All these show that we're clearly in the darkest timeline.

We currently do not have the power to alter it, but we can make it tolerable.

Can anyone post any exciting Arteta Out rumour tweets, from legit people?

Trusted ⭐
This from Arseblog today is spot on.

Another thing: this game, this poxy defeat, should not be filed away under the explanation that ‘This is a young team’. It might be, but last night this young team had all the old faults that come with this manager. It’s too much of a safety net for Arteta. Young, old, somewhere in the middle, if you can’t build attacking moves, if you can’t make chances, and if you can’t score goals, it doesn’t matter how old you are. And at this level, you’ll drop points and lose games because other teams – regardless of their own struggles – can do that fundamental thing better than you can.

Mrs Bergkamp said:
I have to disagree. The top 3 is set abd then you have West Ham, Utd and Sp**s. After them, Leicester and Villa are looking good. Who knows what Newcastle will do and how they will progress? We can't defend, we can't score and the midfield is where playing careers go to die. There's not a youngster with the personality of Cesc or Guendouzi to drag us along. They've all been neutered.
Click to expand...

Given how last season panned out it wouldn't surprise me if we go on a prolonged run of **** results now. If we cannot keep things tight at the back we are doomed to lose as we cannot progress the ball up the pitch at all with any consistency. God, these two last games have been soul crushing!

Wouldn’t surprise me if he became the first manager to survive a dressing room revolt tbh. We’d probably be the first club to sack a bunch of disgruntled players before getting rid of the manager.

Honestly can’t believe the lack of whispers about an unhappy dressing room. Adrian Clarke has always said players tend to work you out pretty quick, especially if you’ve got no reputation to fall back on and you can lose them quickly. I’m baffled that all I ever hear is that the players are behind him and say he’s some kind of tactical genius.

Then again anyone with an opposing view to him probably is lined up and whipped while Mikel watches from on high.

I don't see realistically how we get top 4 with him. It's too late for that now. Besides, I don't want to see this club in the CL under Arteta. Imagine the embarrassment.

GLITCH said:
I don't see realistically how we get top 4 with him.
Click to expand...

Think these last two games showed that all too well. We are just not good enough to even have a sniff at top 4 now. Conte, Moyes, Tuchel, Klopp, Rangnick and Pep are all miles ahead of Arteta as coaches and our squad isn't better or much better than any of theirs.

SA Gunner said:
Why do you think the club have and are backing Arteta, and giving him so much money then?
Click to expand...

That and the fact that our new hierarchy doesn't want to admit they've got it wrong...again. Letting Mikel go is as much their failure as it is his. Arteta is their vanity project, a sort of "We'll show them how hip and forward thinking we are. Watch this space!" gamble, which obviously didn't pay off (as could be rationally expected). A gamble they should have never taken, but here they are, with eggs on their faces - and now they've got explaining to do.

At this point they don't have a choice but to stick with Arteta; it's too late for regrets.

Lastly, some nice comments from his peers are just professional courtesy - and all based on how he's performed as an assistant manager, which isn't translatable to being a good or even an okay manager; there are many examples. How often do you see managers badmouthing their peers, let alone their former assistants? It's just poor form.

I want the best for Arsenal. And this is precisely why I want Arteta gone. Think of it this way - if you're friend is in a toxic relationship, would telling him to persist in it be really a thing a best friend should do? It might hurth him if you tell him the truth, but it's the best way forward. The quicker you'll do it, the quicker he'll be on the mend and looking for new opportunities.

Start the party when nonewthing turns. That guy kills me

yorch44 said:
I am serious when I say he is not a mid table manager. He is relegation manager being saved by how good are some players individually and the money and structure arsenal have.

Give him Brighton and he wouldn't be anywhere near of what Potter has done with that team. They would be in Championship or Ligue1.
Click to expand...

He'd make Brighton so bad they'd have to migrate to the French league?

yousif_arsenal said:
I'm normally patient person and supportive i don't like spend all day saying the manager s*,t or he need to sacked because there no point just wasting my anger for nothing. and I'm sure Arteta is here until summer but if things seriously not improve the club need to take decision.
Click to expand...

Think this is spot on @yousif_arsenal - I don't like knee-jerking either, but I think you can take a rational assessment of where we are at now and say that there are coaching issues which are holding us back.

Arteta's not a dreadful, car crash of a coach at all. I personally think he'll have a decent career and has got something about him. But he's a level below the best and we'll fall further behind unless he's replaced asap. Need Edu to grow some balls now and pull the trigger early. We've already lost out on the best available options in Conte & Rangnick. If Ten Hag, Potter or maybe Gallardo are available then we should get them in now, not wait for the rot to get worse.

field442 said:
The Pepe stuff is just ridiculous. We lack goals, he’s one of our best goal contributors over the past two seasons. These beefs he has with players and small **** syndrome attitude he projects does nothing but harm the team.

Told a friend this about Pepe on Sunday.

Said the same about Özil then, he wasn't at his best anymore, but he was better than not even making sub appearances when we were in desperate situations. 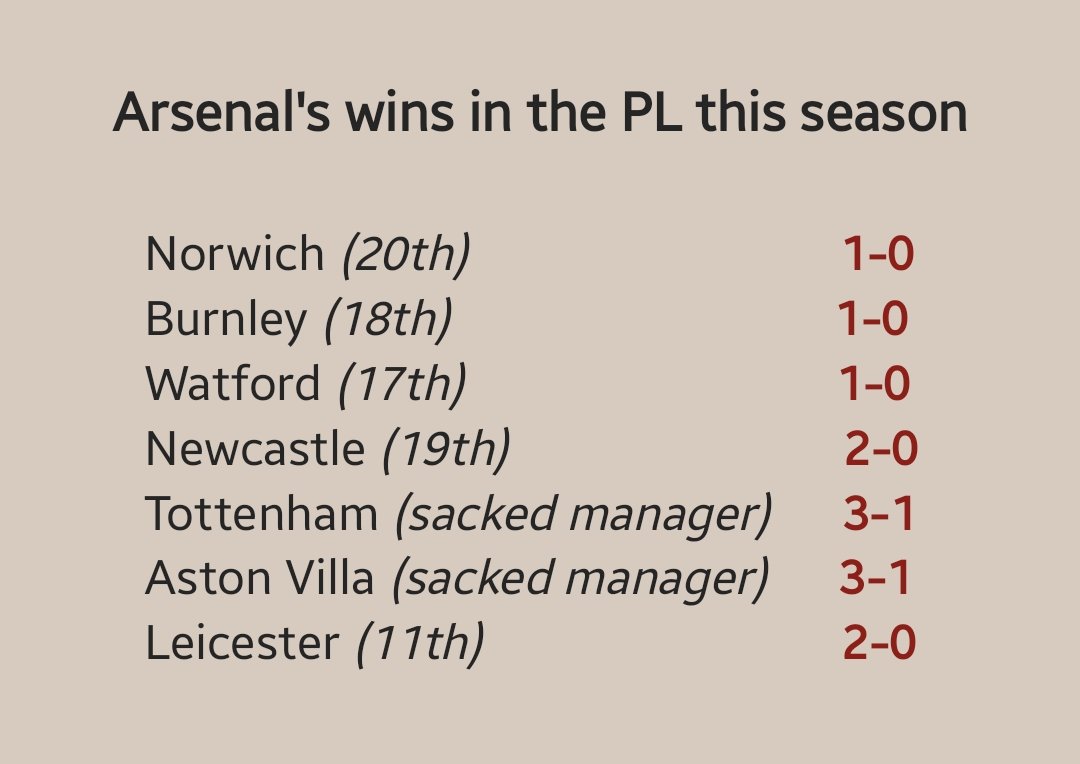 People were getting excited over beating relegation fodders.

Threadmarks
You must log in or register to reply here.

I don’t look at the passport of people; I look at their quality and their attitude.