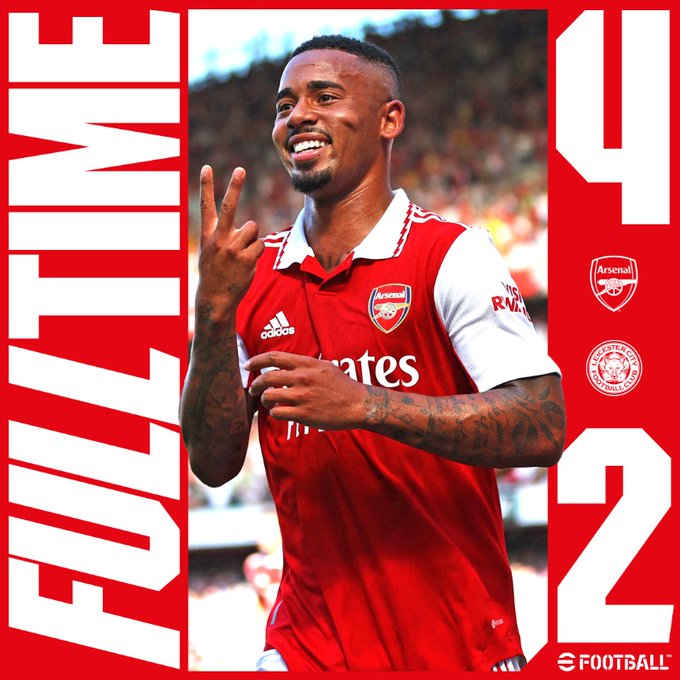 
Player: Martinelli
Looks like Jesus will win comfortably but I felt martinelli was more influential whole game and was the one to start putting pressure on Leicester and gave the control of the game for us after the initial few minutes were end to end.

Will go to Jesus, and he was elite too.

But Martinelli was a mad man out there...he will win PFA young player of the year, calling it now.

Jesus , Martinelli & Zinchenko had a great game..Jesus should have scored 3-4.
E


Player: Nelson
Can't look past Jesus on this one, impossible

2nd is easily Xhaka, he's the key that made that left side work

It's hard to not give it to Jesus with 2 goals and 2 assists but I thought Martinelli was fantastic today.

Moderator
Everyone choosing G.Jesus and i have no argument but Martinelli was even better. He my motm

Martinelli was a different gravy for me today, getting his man strength now too...
I

Ramsdale: 5,5: not perfect today , risked penalty against Vardy in first half and in the second goal of leicester could do better
White: 6,5: other solid game , show quite good adaptation to new position. i would alternate him and Tomi in base to opponents
Saliba: 6,5: i give him good mark despite the big mistake ; other very good match for him , pity for the OG
Gabriel: 7: I liked him really a lot today , better then against Palace, showed more confidence.
Zinchenko: 6,5 Offensive side really super!. Left side of field with him Martinelli and Xhaka was a nightmare for Leicester , defensively need to make better; big positioning error in the second goal of leicester.
Partney: 6,5: better then first match, but not again at his best in my opinion
Xhaka: 6,5: he started really bad , with an error that could cost us a goal, but grew a lot during match , happy he could also score!
Odeegard: 6 as in the first match he run a lot ,but had just few quality plays ; if we want to compete against top teams he need to step up
Saka: 5,5 not his best day ; we were playing more on left side
Martinelli: 8: First half he dominated Fofana , Tecnique plays, Press for 90' , and a supergoal!. he is definitly stepping up and his potencial is huge!
Gabriel Jesus: 8,5: 2 goals, 2 assists , some hold breathing plays. and in general sensation that when have ball in feet something good will happen , i don't gave him 9 just for the mistake in the final

Dusted 🔻
Finally got round to watching the full 90 on Arsenal.com


Fans: 10/10 for backing Saliba after his mistake. I'am very critical about them but their actions this week is what I want to see. I was wrong for not wanting Saliba back after seeing that.

Conceded 2 so can't rate defence too highly, Jesus and Martinelli best forwards on the day.
E

I know it’s about the MOTM but I do think Ramsdale need an arm around the shoulder. Feels to me his game is becoming forced and unnatural and leading to errors. His face after the Vardy penalty says it all.


Player: Martinelli
Have to give it up for my boy Martinelli, not sure about this Artetasexual stuff but I'm a Martinellisexual for sure. Think Jesus just pipped him for MOTM but could have been either honestly.

Have to give it to Zinchencko his link up play was great.

You gave Jesus higher rating than xhaka but voted for xhaka in the poll.

All four players on the left were elite and on another day would have received a man of the match.

Xhaka and Martinelli definitely thriving with the new inclusions. I am donning the red cap with MAGA 'making arsenal's left side great again'

boonthegoon said:
You gave Jesus higher rating than xhaka but voted for xhaka in the poll.

martinelli was great but Jesus was like the real Jesus

I believe the target of anything in life should be to do it so well that it becomes an art.