First screens and info point to the most realistic footie game yet.
by Alex Simmons, IGN UK


UK, June 18, 2007 - Konami has lifted the lid on the first details for the next Pro Evo game and has promised that it will be "the closest simulation of real football to date." Pro Evolution Soccer 2008 (working title) will be released on PlayStation 3, Xbox 360, PC, PS2, PSP and DS later this year and boasts what Konami is calling "a revolution in player artificial intelligence" -- dubbed Teamvision, which enables the opposition to learn your style of player and adapt their tactics accordingly.

According to Konami, Teamvision will totally change the way PES fans play the game, because the adaptive AI forces players to constantly rethink their tactics. So, for example, if you prefer to run the ball down the wing and knock in a cross to a tall centre forward like Peter Crouch, your opponent will quickly change their tactics to close down the wide players and mark your hitmen more heavily. Similarly, if your favoured method of defence is to protect the back four with a sweeper -- then the other team will quickly pick up on this and change their attackers to take advantage of your formation.

Naturally the effectiveness of an opponent's change in tactics depends on the team they're playing as: strong international and club squads will be able to counter your tactics faster and more effectively than less skilled clubs, although players will still notice the change in their opponents play if they resort to using the same channels of attack. Likewise, powerful teams can also punish lazy tactical play to devastating effect, so if you lose the ball in your half to Robbie Keane there's a good chance he'll score. However, lose out to a less proficient striker and the odds of them converting the shot are less favourable.

The improved AI changes the way the game is played almost on every level, forcing players to take a much wider view of the game and real use the full width and breadth of their team. As such the pitch scanner plays a much bigger part in the game because it enables players to pick out openings in the defence (if they're skilled enough, obviously) and thread a ball through to an advancing attacker.

Teamvision affects set-plays as well as free play too. Cheap free kicks are a thing of the past because the opposing defence will close down runs faster, which prevents players from passing a ball into the box and tapping a shot in from short range. Naturally there are times when you will scorean easy goal, whether it's from a well-worked passing move or a fizzing direct free kick, but the enchanced AI now means players must think more if they want to consistantly win.

Other improvements promised for PES 2008 includes improved greater close control, so there's more scope for skilled dribbling, tricks and neat inter-player passing moves. Setting up a free-kick isn't quick as restrictive either, whether you're defending or attacking. You can change the number of players in the wall if you're defending or, if you're on the attacking, plan runs more intricately and position specific target men for the kicker to aim for.

However, the most noticeable improvement PES 2008 will offer over its predecessors (apart from Teamvision of course) is the graphics. Konami promises it will be a true next-gen experience, so there will be proper facial animations, shirt pulling and kits that flow and crease as the players run around. Watermarks from sweat and rain appear as the game continues too, bringing the player that bit closer to the action than ever before. All next-gen versions will feature a fully functional edit mode too -- something that was sorely lacking from last year's 360 version of PES 6 -- so players can create there own team and or edit existing ones. As yet there's no word on which licensed teams will feature or indeed what online modes we can expect.

"We have taken a long hard look at what has made the Pro Evolution Soccer series so popular, and where we want to take it next," commented Shingo 'Seabass' Takatsuka, creator of the series and Producer of PES 2008. "With the new Teamvision AI system, we truly believe that we have elevated the game to a new level. The movement of players off the ball, coupled with the total control given to the player, creates the closest simulation of real football to date. We really hope everyone enjoys our evolution. I promise it will be worth the wait." We certainly hope so.

We'll bring you more information on PES 2008 in the coming weeks. For now feast on these screenshots.
Click to expand... 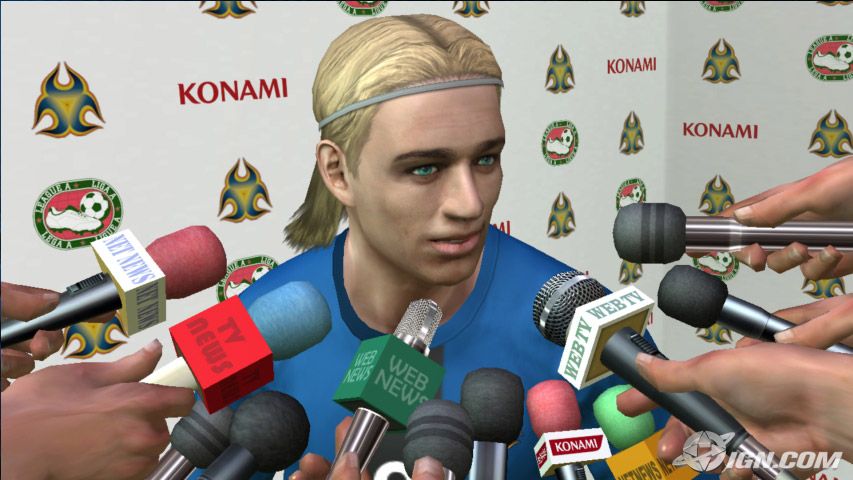 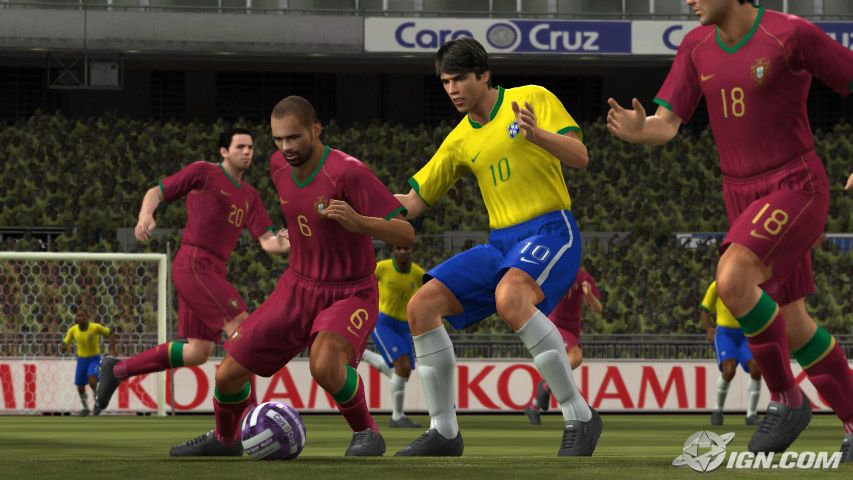 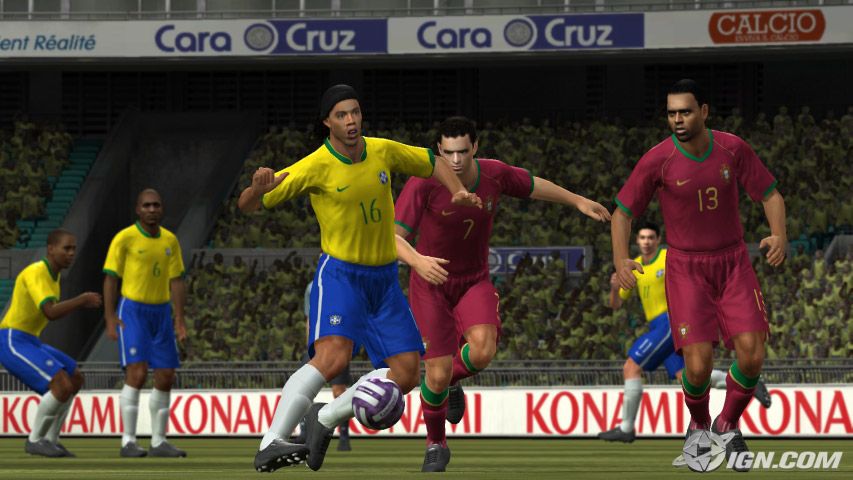 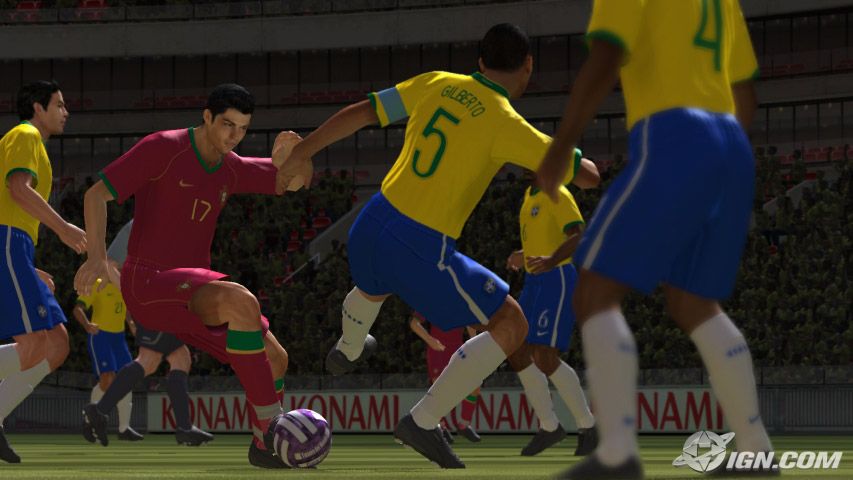 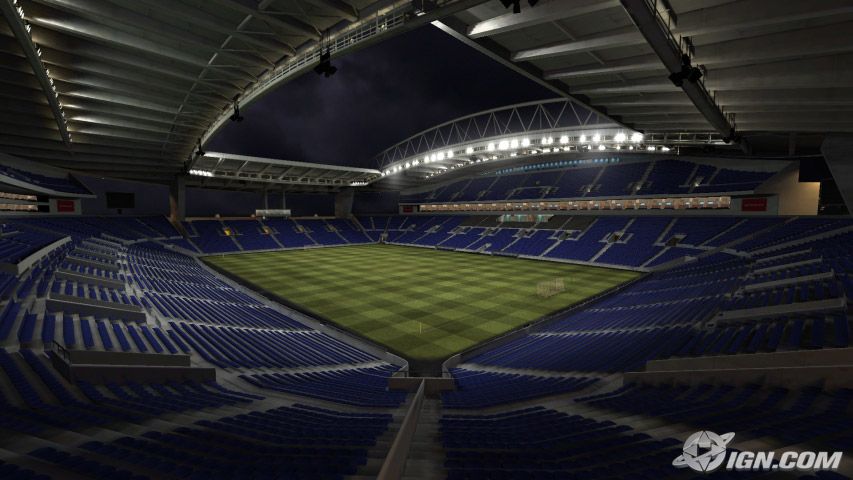 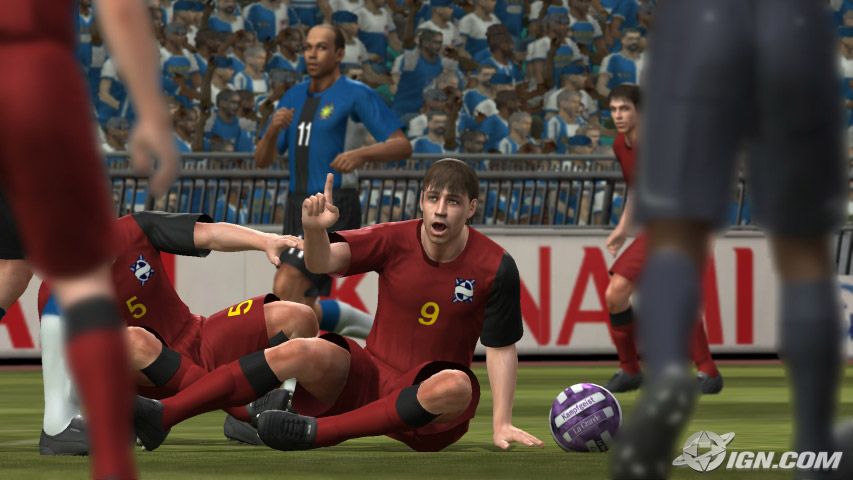 Trusted
Go on Gilberto, you have him!

Im def gonna buy this one, my first ever Pro Evo!

My god what have you been playing for the last 5/6 years? :shock:

My god what have you been playing for the last 5/6 years? :shock:
Click to expand...

Fifa :evil: or whatever, i go through phases, right now im getting out of Fifa mode into F1 2004 mode

My god what have you been playing for the last 5/6 years? :shock:
Click to expand...

I fell sorry for you stuart,mate.

Looks okay. Will see how it fares when released.

the line "Konami has promised that it will be "the closest simulation of real football to date"" doesnt really suprise me.

Same appears every time a new game is released

they aren't wrong though lol.

Elite
Looks nice, I just hope there is some substance.

PES5 and PES6 were barely any different.

are those screen shots from the PS2 version or PS3 version? i'm sure there's a difference. anyway, it looks quality, can't wait for it to come out.

as long as adriano doesn't defy the laws of physics again it's going to be an improvement.

Jameel46 said:
are those screen shots from the PS2 version or PS3 version? i'm sure there's a difference. anyway, it looks quality, can't wait for it to come out.
Click to expand...

Those are pix from the 360 and PC version, apparently the PS3 version will be different. more superior.

ive got pes6 on both the 360 and the ps2. i prefer it on playstation because i use the d-pad and getting used to playing all the time with the 360 stick takes a little while to adjust. but if you use the stick on the playstation controller, i dont think it will make a big difference.

Trusted
whats the difference between winning eleven and PES anyway?

you'd think they put soccer in the name for the americans and not the europeans, but anyway Pro Evolution Soccer atleast sounds better than Winning Eleven; Winning Eleven sounds like something a kid would come up with if asked to come up with a name for a football game, the name makes no sense as far as i'm concerned

Elite
Actually there are some differences between PES and WE games.

WE games are generally alot easier than PES, and the keepers are notoriously BAD in WE. I always find the shooting is alot better in WE though, and for some reason you can apply more curl both to open play and set-piece shots.

Pro 6 the goal keepers are a disgrace.

You could play Pro all day with a bunch of mates. Winner stays on. 3 nils a white wash. Get in my son!!!


>YounGunner< said:
You could play Pro all day with a bunch of mates. Winner stays on. 3 nils a white wash. Get in my son!!!
Click to expand...

Few beers and evo instead of going out on a fri night to save money for holidays! Even better! Get in my son!!!
You must log in or register to reply here.