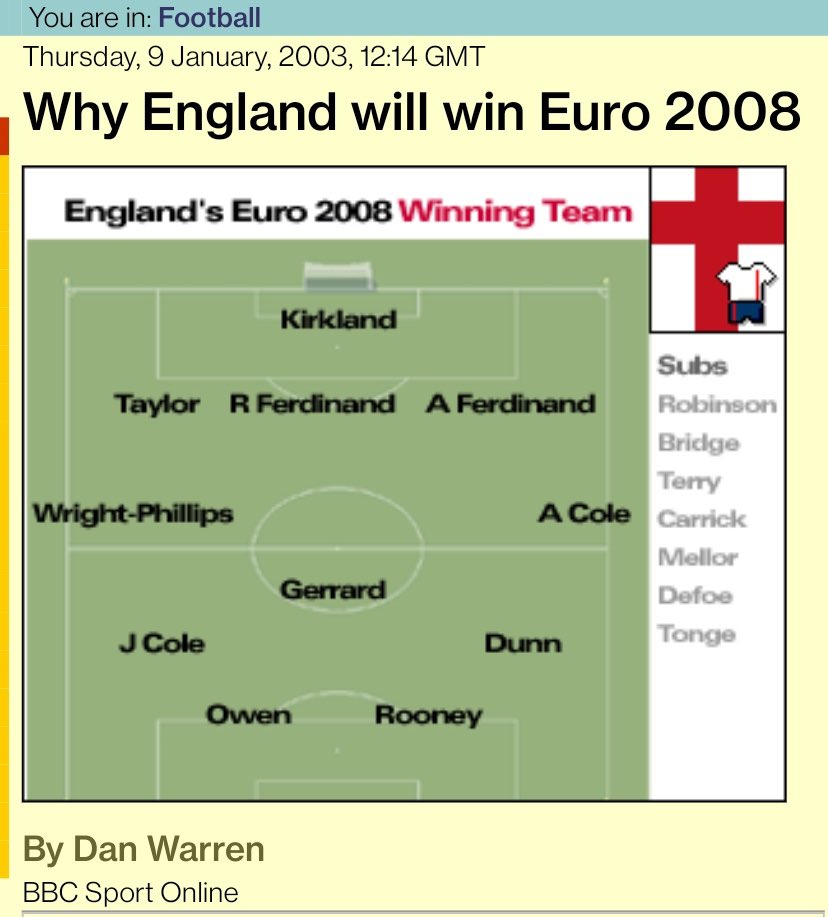 This is so incredible when you think of it.

First of all the formation choice playing SWP as a RWB in an era when this formation was nowhere near being as popular as it is now. Taylor and Anton Ferdinand chosen while Terry is on the bench. David Dunn being in there and Lampard wasn't even considered at all. I would say Carrick being on the bench is laughable but that ended up being reality. Combine this with the failure to qualify (I mean they should've but still) and it's quite incredible how so often football doesn't work out how you'd expect.

SWP ended up having a pretty mediocre career given all his hype, I know he won some medals and all but still. Ironically did end up starting for England in the 2010 world cup which I still find unbelievable, wasn't like he was in top form at the time. Taylor would end up having a fairly mediocre career staying at Newcastle and Anton Ferdinand's most notable moment was being racially abused by the England captain. Dunn was a mid-table player throughout his career and never got another England cap after his debut.

It is weird how Lampard was never considered at all here when he'd go on to be runner up Ballon d'Or to Ronaldinho not too long after.
Click to expand...

My guy Carrick is still in the mud in a fantasy world.

Reckon you and I would destroy Messi and Tevez at this game.

Riou said:
Reckon you and I would destroy Messi and Tevez at this game.
Click to expand...

No aerial presence, no power and no skill from them either. Can't see either of them having much of a career once we're finished lobbing balls over them if I'm honest.

I clicked on a BBC article about Vieira and how he hopes to do at Palace, but this part jumped out at me...

"In the early 90s, if you went to Selhurst Park and Highbury, you wouldn't have had a different experience. We were in the same stratosphere. But we never seemed to grasp the moment."

...this is a quote from Steve Parish, comparing Arsenal and Palace in the new doc they have.

How the **** were Arsenal and Palace in the same stratosphere?

Have they even won a single major trophy

Riou said:
Have they even won a single major trophy

Yes, they won the Zenith Data Systems Cup in 1991. Big one back in the day

. They beat Everton 4-1, two goals by a certain Mr. Wright. Martin Keown turning out for Everton. He broke his nose in the 80th minute.

Moderator
a multi million football player the mirror not mention the name first before everything is true. its child sex offense this is pretty serious.

Moderator
There is talks the footballer is gylfi sigurdsson who arrested. it was reported in twitter few days ago and i thought it was some kind of joke but look like it could be true.

Either way, its probably best not to speculate until its proven.

Trusted ✔️
Any opportunity to use this.

Trusted ✔️
Louis is back!