In the darkest moments of the Unai Emery era, when the club was spiralling out of control and the results were becoming worse and worse, it became almost impossible to convince an Arsenal player to stop and talk to the media after matches.

It was a dreadful time at the club and the players knew what they would be asked. What is going wrong? Why is this happening? How do you turn it around? These are not easy questions, and most of the first-team squad had no intention of answering them publicly.

Most of them, but not all. As journalists on the Arsenal beat we could always rely on Sokratis, a true warrior of the mixed zone (where players ‘mix’ with journalists in short post-match interviews), to front up. When the rest of the players hid, or indeed took the back exit from the changing room to avoid the mixed zone altogether, Sokratis was generally open to a quick chat.

Now, we journalists can certainly read too much into these things. And it is human nature for our personal views to be slightly skewed towards the players we actually like. But to this observer, at least, it always felt like proof of Sokratis being a senior, mature leader of the dressing room.

It can only be hoped that Sokratis, who has not been included in Arsenal's Premier League or Europa League squads, is not labelled a flop in the years to come. Admittedly, he has not justified his £18 million transfer fee, or his wages of around £100,000 a week. But he was very rarely a disaster when he played. In fact, in many games under Emery he was one of Arsenal’s best performers. He also celebrated slide tackles like goals, which was terrific fun.

Sokratis has been a victim of two things in his Arsenal career. Firstly, the complete lack of team structure at the end of Emery’s reign, when the defence had no protection from a non-existent midfield. Secondly, the change of style under Mikel Arteta, which has not suited his game. The Greek defender has many strengths but threading precise passes out from the back is not one of them.

He could have left this summer, of course. But at 32, with one year remaining on his deal, and a newborn baby arriving in August, there were plenty of reasons to stay. Earlier in the summer, sources close to the defender made the point that other players have been frozen out and then welcomed back into the fold under Arteta. Why not Sokratis?

His omission from the squad lists obviously prevents that from happening now. It feels like a shame for a player who always gave it his all. He will not go down as a successful signing for Arsenal, given the finances involved, but he was the type of character they needed at the time. Some of the criticism he has received has been unfair and, to my mind at least, he will be missed when he leaves.
Click to expand...

I don't understand why he wasn't a successful signing, though. He is a good defender, again left out of strange reason.

Though at least I can justify his axing

krackpot said:
I don't understand why he wasn't a successful signing, though. He is a good defender, again left out of strange reason.

Though at least I can justify his axing
Click to expand...

I see him as an ok signing. Not great not terrible. Good defender in duels, not a ball player and better options ahead of him to suit Arteta's plans.

Always 100% and rarely the poorest player on the pitch in my memory. Wages too steep for what he offers.

krackpot said:
I don't understand why he wasn't a successful signing, though. He is a good defender, again left out of strange reason.

Though at least I can justify his axing
Click to expand...

He can't play out from the back.

American_Gooner said:
He can't play out from the back.
Click to expand...

but he was so fast and brave!

Dunno man, if we are playing 3ATB, he has a place. I think he even played FB for a while.

Charles Watts also confirmed that he has a lot of time for Papa for the same reason.
I like him a lot myself, came across as a warrior and a bit different from our usual signings, probably got him too late.

Being up for a chat doens't help Luiz too much though

- the media here really makes or breaks you man.

American_Gooner said:
He can't play out from the back.
Click to expand...

So strange that Sven signed him yet he couldn’t pass for toffee.

krackpot said:
but he was so fast and brave!

Dunno man, if we are playing 3ATB, he has a place. I think he even played FB for a while.
Click to expand...

He's a stop-gap at best. If he's a starter three seasons after arriving, the recruitment group has failed.

American_Gooner said:
He's a stop-gap at best. If he's a starter three seasons after arriving, the recruitment group has failed.
Click to expand...

yeah, which is probably why he hasn't spoken out too much. Still think we could use him, though.

Willian will probably be good for an year before we need to drop him. 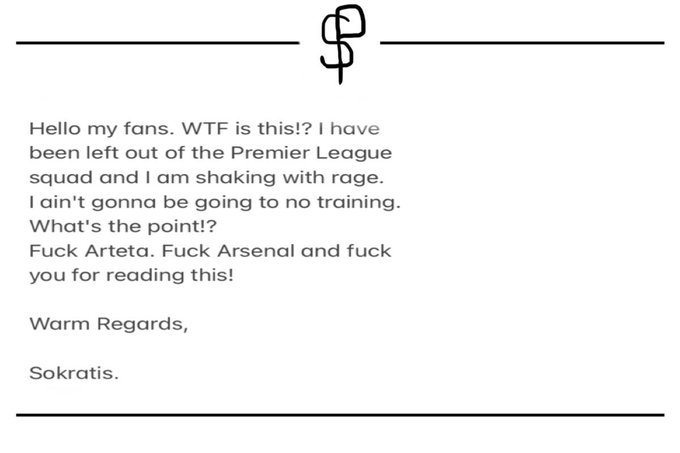 Never really good enough with his feet and his challenges were hot headed. Wish him well though.

Trusted ✔️
Sokratis has nearly 90 times fewer pages dedicated to him on AM compared with Özil, despite both playing the exact same amount of minutes this season.

It's clear, Arteta wants to get rid of all his mates, I expect Bellerin is the next victim of Arteta great purge.
Last edited: Oct 22, 2020

The 31-year-old told reporters when quizzed on his future: “I don’t know.

“I have one more year here but me, I never sit on my contract.

“I don’t care. If I’m not happy, I don’t play enough or the coach doesn’t like me, I don’t care about the contract.

“For me the money is not important, it is important I feel good, I feel happy and the team is happy with me. If not, I take the road and I finish.

“I don’t think about it, I think every day to be happy and help the team and in the end we will see but what I say is that I am not a player who sits on a contract – I don’t need it.”
Click to expand...

Now he doesn't care that he's left out of the pl squad, interesting...

Why is this bums thread open but the Mesut one closed?

Moderator
Is he trying to be like Mesut? Dead tweets like this aren't going to cut it.

I get him not starting, but the way he has been banished completely seems odd.

I have a feeling that papa is the 2nd guy that didnt accept the covid pay cuts after Özil... Dunno who is the 3rd