Can't believe they only payed him 60k pw~. Shot themselves in the foot.

This is the only thing that I will listen to today.
Click to expand...

Ffs.. our fan base truly has some real idiots.

Tomb Bombadil said:
I don't hope that's true. Would be crazy to upgrade his salary from £70k to £260k a week.
Click to expand...

This is from the Sun (It's obviously bollocks though) 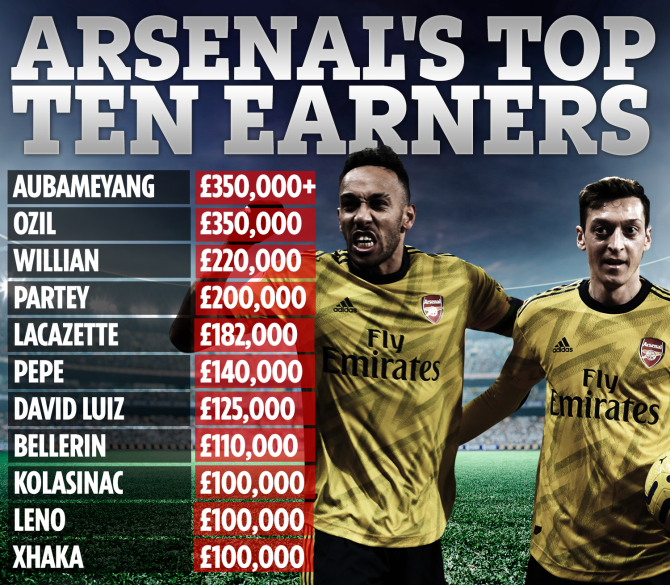 pigge said:
Can't believe they only payed him 60k pw~. Shot themselves in the foot.
Click to expand...

Yeah AM can't complain, I gather he didn't feel very valued and he literally wasn't. Paid a lot less than players in less important roles. If they didn't want his buy out to be triggered they should have given him a better contract. And stopped ****ing us about all window.

Oxeki said:
This is from the Sun (It's obviously bollocks though)

Delete this, don't want this thread turning negative about Willian and Özil.

Can't believe we just rocked up to the Spanish headquarters with £45m and took the player, most unArsenal like bit of business ever.
The best part was nobody bothered to tell Atletico

Fair play to the people saying we were haggling over Aouar because we wanted both and Partey's deal was obviously much more straight-forward because of the clause.
If I am being brutally honest given one or the other I probably would have gone for Aoaur just because we have had no link between our midfield and attack since Özil retired, we don't create anything.
It's quite hard work to watch, especially when you consider we had the likes of VanPersie, Nasri, Rosicky, Hleb and Fabregas all in one team. What you would give for just one of those now.

Anyway maybe the player wasn't sure, maybe we'll go back in January, who knows?
The good thing is they always say look at the spine of the team and Gabriel (I've gone early here), Partey and Auba looks much more promising than we have had for a while.

Rex Banter said:
Overjoyed with this. I get to keep cheering on of my favourite players and our midfield has gone up a level overnight.

Would have liked some creativity but don’t sell Thomas short, he’s going to be able to do a lot of things that will make Pepe and Willian better as well as help out Xhaka and Ceballos.
Click to expand...

We used to score so many goals by reversing attacks and hitting teams when their fullbacks were caught up field.

It’s a shame Özil fell off so badly because he finally has the resilient structure needed to utilise his strengths.

Trusted
Might order his shirt with #5 anyway. Been holding back on the marble one for Partey 5. Sokratis ain't taking that from me.

This is an absolute monster of a player. He brings everything we didn't have. Midfield pace, power, drive. He can shoot from range, he's defensively solid, a consistent passer, and someone who can help us get box to box for quick turnovers very rapidly.

I honestly didn't think we would get this one done as financially for all the world you'd think we simply could not afford it.

For me this transforms us in to one of the more balanced squads in the league. Do we need Aouar too? Probably. I think that ship had likely sailed, but as it stands, we are a Europa League club who has just brought in a champions league player, so my main feeling is gratitude.

This is a very helpful thread that sets out many of Thomas' qualities. Be excited. This is an important piece in our rebuild.

Trusted
Who needs Gunnersaurus when you have the Ghanasaurus

We used to score so many goals by reversing attacks and hitting teams when their fullbacks were caught up field.
.
Click to expand...

That intensity and athletic aggression is something our midfield has lacked for so long that's finally been addressed.

Interesting bit from the Athletic:

Arsenal’s interest in Partey stems back to 2014, when he was stationed on loan with Almeria. At that time, he played as an adventurous midfielder, rather than as a holding player. It was former Arsenal scout Francis Cagigao who first identified him as a good fit for Arsène Wenger’s team, before later proposing his signing to Sven Mislintat and Unai Emery.
Click to expand...

What a signing. Aouar would have been thr cherry on the cake, maybe we'll be back for him in Jan.

We used to score so many goals by reversing attacks and hitting teams when their fullbacks were caught up field.

It’s a shame Özil fell off so badly because he finally has the resilient structure needed to utilise his strengths.
Click to expand...

Yeah, its old fashioned but the team that wins the most 50/50s and second balls throughout the match has a good chance of winning.

We dont have the attacking options of Sp**s/Chelsea, but hopefully we can be the best team defensivly.

MikelHadADream said:
What a signing. Aouar would have been thr cherry on the cake, maybe we'll be back for him in Jan.

Partey/Xhaka/Ceballos are really good options behind the ball. Big creative burden on Willian/Saka/Pepe now, they have the platform now, they have to deliver.
Click to expand...

Great point. All these attacking talents we have now have a solid platform and base to work from. We will need a David Silva/KDB type eventually but until that point we can get top 4 with what we have.

Bullying a Liverpool side who are 1-0 down on a CL night at Anfield? Incredible really. Not only will he add a huge amount to our game, he'll also develop even further here. It really is a huge signing.

He also doesn't have a bad scoring/assist record considering where he was played for Atleti. That will only improve under Arteta.

berric said:
Interesting bit from the Athletic:
Click to expand...

MikelHadADream said:
What a signing. Aouar would have been thr cherry on the cake, maybe we'll be back for him in Jan.
Click to expand...

Honestly dunno, because of the way that whole thing ended. There were reports that Arteta spoke with him personally and tried to convince him of his plan, similar to Gabriel and I assume Partey.

For Auour to then come around and publically say that he'd rather stay at Lyon and from all accounts it sounding like the player rejected us as well makes me think Arteta's desire may have soured there.

We'll see anyway. But I wouldn't be surprised if Arteta's now looking for an alternative.

Can't think of a better weekend as an Arsenal fan in recent history.

The mauling of Utd, Arteta switching to 4-3-3 in the 2nd half vs Sheffield and Pepe masterclass, Liverpool meltdown and then signing Thommy feckin' Partey. Wow.
You must log in or register to reply here.