He's come a long way from being disrespected like this: 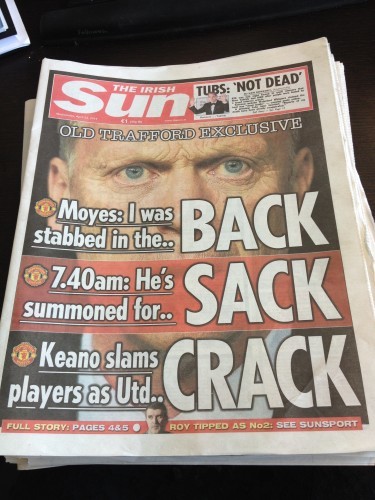 American_Gooner said:
He's come a long way from being disrespected like this:

That newspaper is something else.

Dokaka said:
Seems like the majority opinion on Rice is starting to turn, don't see a lot of "overhyped English player" anymore. Was only a matter of time when people would start questioning how we've continued to get better and better after Rice got into the team.

He's sensational and he's only going to get better as well. Tailor made for the Premier League.

I would be salivating at the prospect of a Partey- Rice midfield. Sadly I reckon it'll be one of City, Liverpool, Chelsea or Man U who comes knocking on the summer.

Trusted ⭐
Moyes was always unlucky being called a dinosaur like Allardyce or Pulis.

If you look at the work he did at Everton on a shoestring it was genuinely incredible. Once he left they started spending big money but haven’t come close to what he achieved with big names like Martinez and Carlo.

West Ham were an absolute basket case until now and he’s been consistently excellent for a while now.

Rex Banter said:
Moyes was always unlucky being called a dinosaur like Allardyce or Pulis.

If you look at the work he did at Everton on a shoestring it was genuinely incredible. Once he left they started spending big money but haven’t come close to what he achieved with big names like Martinez and Carlo.

West Ham were an absolute basket case until now and he’s been consistently excellent for a while now.
Click to expand...

People really underestimate this point. We were among the favourites for relegation when he took over, with years of bad spending and seemingly no plan.

I was extremely vocal about how much I hated Moyes' brand of football, and don't get me wrong, it was ****ing ****e at the start, but looking back it was clearly a case of building a foundation one step at a time.

It simply wasn't possible for us to play solid attacking football, because we didn't have the players and, more importantly, he hadn't been given enough time to drill in the basics to allow for more advanced attacking play to flourish. I'm not saying we're some free flowing tiki taka team, it's still very much a Moyes' brand of football, but it's miles ahead of managers like Pulis and Allardyce. As soon as we win possession, you see players sprinting into clearly trained patterns that opens up passing lanes other than just hoofing it long. When Rice threads it through the middle to Antonio, Bowen and Fournals are already running before Antonio receives the ball instead of waiting to see what happens. They know the flick could be on, and they know where it'll land.

Our play when team sit deep is pretty basic, but it works. Get people in the box, overlap FBs, cross it. It works because it's unstoppable if the cross is good, but it certainly also leaves a lot up to chance. But at our level, it's more than fine because the players aren't asked to do more than they ability allows for, and most of our attacks come in transition anyway.

I was so happy to be wrong about him. Also helps that he seems to be a genuinely good person, unlike the managers to you mentioned.
B

A team with Fabianski in goal in 2021 is above us in the league and looking like a top 4 team.
B

Gone off them since Agbonlahor said they are the 2nd biggest team in London.

Like that they hate Sp**s, but their association with bubbles and bubble related songs is very dodgy, imo.
Click to expand...

What about Fabianski in goal?

BigPoppaPump said:
What about Fabianski in goal?
Click to expand...

An average keeper in a Top Four team?

Suits my argument of the league not getting stronger, tbh.

Antonio is such a G.

Favourite striker in the EPL.

I'm ok with WHU doing well, I always had a bit of a soft spot for them, as long as they don't finish above us.

Trusted ⭐
What a dickhead.

Hope he breaks his leg and never gets to play football again.

Hope somebody kicks him

Hope he breaks his leg and never gets to play football again.
Click to expand...

boonthegoon said:
Hope somebody kicks him
Click to expand...

should let that Leicester clown from the weekend pay his debt to society by having a few free hits on this ******.

We can't afford to lose him, but I'd rather drop down the table than see him play for us. This ****ing sucks.
G

I am starting to think that 95% footballers are dickheads.

Trusted ⭐
He says he’s “deeply sorry”…yeah f*ck that, he ain’t public-apologising his way out of this one, should be charged with animal cruelty.
You must log in or register to reply here.

If you eat caviar everyday, it's difficult to return to sausages