Expectations For The 21/22 Season 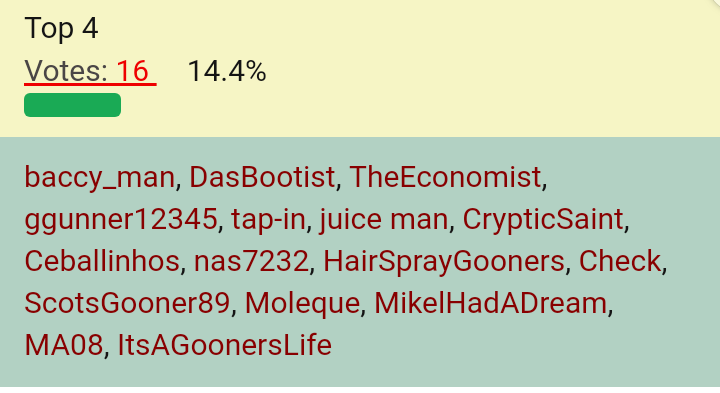 @HairSprayGonners told me our squad is dogshit but he voted top four.

Must have had some faith in Arteta last season.

Trusted ⭐
If bring in a decent CM to partner Partey and a decent RB, then we become a lock for for top 6.

Scoring goals will still be a problem unfortunately. Europa League is what I expect.

Makingtrax said:
Must have had some faith in Arteta last season.
Click to expand...

Was shocked I wasn't in this, then I remembered I voted for a title challenge last season...now that's what you call an Arteta fan!
Last edited: Jul 27, 2021

Minimum required this season is a top 6 finish. The likes of Leicester and West Ham finishing above Arsebal is unacceptable.

What I need most though, is proper progressive football. Not this rubbish we watched so far under Arteta.

Trusted ⭐
All teams will struggle at different points in the season. Small runs of form will be the norm. As long as I can see some consistency in our play and team selection I will be happy. I hope we use the absence of European football to our advantage in the league and go strong to win the League and FA Cup. I'd want the strongest team possible to instill a winning mentality in the squad early on and hope that momentum can carry forward into the latter parts.

Riou said:
Was shocked I wasn't in this, then I remembered I voted for a title challenge last season...now that's what you call an Arteta fan!
Click to expand...

Trusted ⭐
The club has been investing 5th for 6 years now. If not winning the title was enough for the fans to run Arsène out of town, and not getting the boards target of top 4 was enough to sack UnaI then why should this guy steal a living outside the champions league?

Top 4 or get somebody experienced in who knows what they’re doing.

I say 5th or 6th, I think without Europa we’ll get a lot more wins.

Trusted ⭐
@Oxeki add a poll if you can..

My expectations have never been lower tbh, just want to see good football and signs we are heading in the right direction .

My expectations have never been lower tbh, just want to see good football and signs we are heading in the right direction .
Click to expand...

Give me some poll options, I can't do all the work here

American_Gooner said:
Give me some poll options, I can't do all the work here
Click to expand...

I don't think we have the squad to challenge Chelsea, Man City, Man Utd and Liverpool even with 2-3 strong signings. We also have a worse manager than 3 of those clubs, that isn't beating on Mikel but Pep, Klopp and Tuchel are 3 of the best managers in the World.

I would take some decent football, in with a sniff of top 4 for most of the season but ultimately not quite have enough consistency and quality. Without Europe there is no excuse for not going for it with a strong team in both domestic cup competitions.

Anything below 6th, which would probably mean finishing below Sp**s and Leicester again would be a major disappointment and one Mikel shouldn't survive.

Özil at 10 And Emery Out

Unless there's some big signings coming later in the transfer window I'm expecting us to finish around 8-6th. If Auba hits form again and Pepe starts firing then maybe top 4.

Trusted ⭐
With no extra European fixtures I think we'll finish 5th or 6th. If we see more entertaining football though, no more constant rotation and a heavy challenge for top 4 being made then I could see a reason for Arteta to continue in his role.

If we see the same eye bleedingly dull, methodical football from the vast majority of last season, with poor results on top of that then he has to go. The ball's in his court.
You must log in or register to reply here.

The club changed so much, I changed with it and football has changed with us... But one thing never changes: the 90 minutes still belong to the player, 90 minutes during which he is king.