Ashybashy86 said:
Club making excuses for when they inevitably sell him in Jan or summer. We've been here before.
Click to expand...

They don’t need to make excuses, it’s no secret he will not extend and look to leave if we don’t get CL.

UpTheGunnerz said:
Who do we replace him with? If we get 70+ million. I would take a jab at Timo Werner of RB Leipzig. Cavani on a short term deal? (Extremely underrated, but getting old). Any good strikers in Serie A, La Liga that goes under the radar?
Click to expand...

Werner is linked with Liverpool, Bayern and Utd. That ship has sailed.

I’m guessing Laca will become our main striker, and probably backed up by guys like Martinelli or another younger signing.

Could we be looking at THREE official captains in one season!

Wonder if that has been done before

GDeep™ said:
Werner is linked with Liverpool, Bayern and Utd. That ship has sailed.

I’m guessing Laca will become our main striker, and probably backed up by guys like Martinelli or another younger signing.
Click to expand...

Well we need to buy someone for the Auba money. But im a beliver in Laca so we might just use that cash to buy an enforcer in midfield. Denis Zakaria looks exciting.

GDeep™ said:
Werner is linked with Liverpool, Bayern and Utd. That ship has sailed.

I’m guessing Laca will become our main striker, and probably backed up by guys like Martinelli or another younger signing.
Click to expand...

Auba out, Zaha in...lack of goals though, if that happens in Jan.

Torreira played as a striker for Pescara...

Trusted ✔️
Hopefully Auba outlasts this revolt against him & signs a new deal.

Garrincha said:
Hopefully Auba outlasts this revolt against him & signs a new deal.
Click to expand...

He’s opened himself up for this. He wants out anyway.

Riou said:
Auba out, Zaha in...lack of goals though, if that happens in Jan.
Click to expand...

We are beyond ****ed if we have to rely almost entirely on Laca for goals again.

There's a reason we brought in Auba half a season after.

GDeep™ said:
He’s opened himself up for this. He wants out anyway.
Click to expand...

He has been made captain since liking the posts though. Seems to be a big split in the camp.

Garrincha said:
He has been made captain since liking the posts though. Seems to be a big split in the camp.
Click to expand...

Fair, I didn’t look at it from that point of view.

Miss Sven too tbf...how else would we sign more aging, ex-Dortmund players

Mikhi was part of the Sanchez deal. So, 1 old Dortmund player.

Mikhi was part of the Sanchez deal. So, 1 old Dortmund player.
Click to expand...

Erlis said:
I remember Troopz pic standing on the steps of Emirates Stadium, showig his middle fingers, telling to Emery and Xhaka to **** off. Who do this people think they are, seriously. As far as I have noticed their youtube channel is visited more by non-arsenal fans, making fun of them and of the Arsenal team after each loss.
Click to expand...

Garrincha said:
Its the Skipp Bayless era of sports reactions... I dont believe anything sets AFTV apart getting out of hand.
Click to expand...

Dude, Skip Bayless is an entertainer that never crosses the line, never gets personnal or abuse players. He has his own show with Shannon, which is his "contradictor".
It has nothing to do with a guy that pretends to be a fan who insults his own players on social media when he knows he has an audience.


Anyway, about Skip Bayless, I don't see Anthony Davis / Kyrie Irving / D Wade liking Skip tweets, or inviting them to their games...
How would LeBron react if one of his team mate openly support Skip? Even though he's just a troll, I don't think he would like it.


Garrincha said:
I have seen Emery being interviewed on AFTV before & other players interacting but now off limits? I dont really see why they get a Emery interview after all the Wenger stuff but now its their guy getting stick its not on. They cant have it both ways.
Click to expand...

Because companies are still adapting to social medias in general. this is something really new.
On one hand you have to interact with social medias, to show that you value your fans and you're close to them.
Maybe they thought by giving them the opportunity to interview the coach/players they would be on their side? Idk.

AFTV, like any other plateform on the internet isn't a bad thing per se.
But like any other big online plateform, if there aren't strong limits, people who are in charge aren't worthy of such a responsability, it can get out of hand. And I think it did, it has become too big, too viable moneywise for them to stop.
It's not a coincidence if the most famous guys from AFTV are the loudest, who are the most extreme in their opinions, who sometimes cross the line 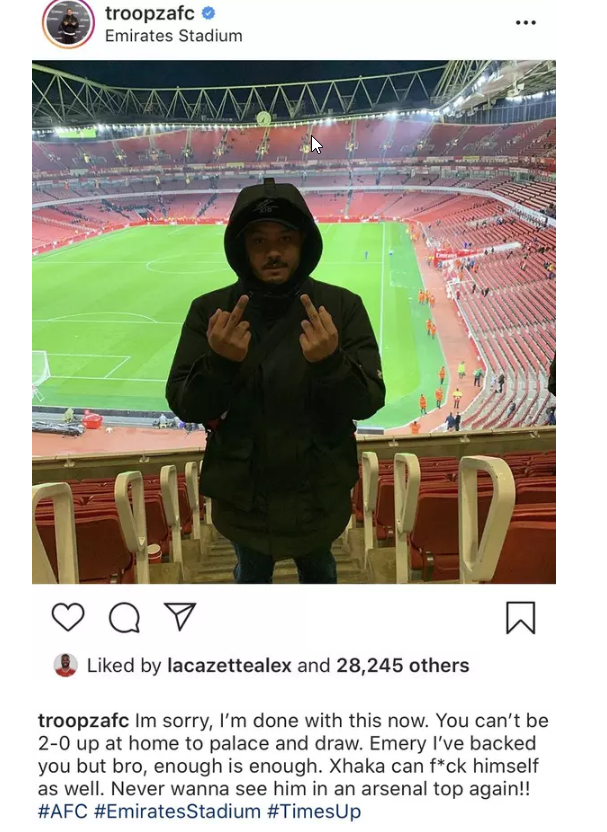 AFTV has been doing more harm than good during the last few years. I'm not saying they have anything to do with our terrible form. They don't. They're a result of our situation.
But they're not helping at all. This toxic atmosphere, our fall under Wenger. That's what made them famous & earn a living.

My main issue with AFTV is that we don't hear them when things are going fine. I don't see them growing and doing something else, meaningful for fans & the club to improve things that are around the club. Work with the club to improve the atmosphere at the Emirates which is waaaaay too quiet in my tastes...
It's really easy to vomit all your hate every weekend and to make rants when things are going bad. Anybody can do it.
Last edited: Nov 11, 2019

Moderator
This is honestly going too far, questioning his character

BigPoppaPump said:
These are men in their 30s waiting for footballers in car parks to take pics with them.
Click to expand...

Pathetic. That whole channel is an embarrassment and it has gotten to the stage where it’s just feeding these guys’ egos, bank accounts and match day experience at the expense of the harmony around the club.

Most of the channel is viewed by non Arsenal fans, it’s a mockery