yeah, obviously they have no money.
Click to expand...

Stringing us along ffs!!

Sebastes said:
- No rush to sell
- In his prime
- Wants him specifically (Mou’s no 1 target, seemingly without backups)
- NT captain
- Off the back of a really good euro’s
Click to expand...

For once the other side has more to lose if this transfer falls through. Mourinho demands specific players. Even if it seems unreasonable. He had to have Matic when he first arrived at Man Utd, even if the club had to fork out £40m.

As I said before I would like to see Roma get a similar profile player for him for the money they're offering. We hold the most cards. Arteta would happily reintegrate Xhaka back into the team and Edu would be over the moon because that would mean one less transfer for him to expose his inexperience/ineptitude. Win win for the hierarchy.

HairSprayGooners said:
**** off Roma you clowns. That's made me even more annoyed now.
Click to expand...

Told you they can push the boat out if they want. But of course they will try every trick in the book before they hand over a penny.

gunner4lyfe said:
1. That right there is a problem
2. Is that 'prime' even good? Lol
3. Well he should pay up then
4. He was also captain here and...well...you know
5. One good game against France🙄
Click to expand...

I’m not arguing that Xhaka is that good or that I want him to stay (play). I’ve been against him for a long time and see him as one of the key issues with our team. But there are always two sides to a coin and this is a negotiation.

1. Might be a problem for us fans (and potentially the club), but the facts are that from a contractual standpoint we can sell him next year as well - so no rush
2. If we think about footballers prime as becoming their best, Xhaka should at least keep his form from this season where he’s been decent by PL standards and good by BL/Serie A standards
3. My point exactly
4. Not so much about leadership as the prestige and value-add it is from a price perspective. Also I don’t think Roma puts too much emphasis on that...
5. He was good in this Euro and it wasn’t only that one match, even though that might’ve added a bit of a rose tint.

Unintetional on my part 🤣 But if I can even illicit a slight ounce of the brilliance of one of English literatures most decorated writers, I'll take it 😉

They know we will eventually succumb. They already did it with Mkhi. Even though he had a decent loan season there we gave him away for free.

the stingys have started their game

Trusted ⭐
Delaney even if he Average player will cost Roma between 15-20M. Roma need to get mourinho the players he wants

From their point of view, they should sign whoever they can get for less money, tbh.

Definitely Not An Old Poster

I swear it's only arsenal fans who mention 2 years left on contract as why a player will go for less money. The 2 years is only relevant to the selling club. It just means they have to make a decision to sell that year, try to extend contract or just keep the player till the end of his contact. 2 years left doesn't give a discount to the selling club, it just means that player is more likely to be available for you to buy him.Tell me a player that went for less money cos he had 2 years left? 1 years yes, then they become cheaper. Do you remember when we had Alexis Sanches on his last 2 years? City wanted to buy him for £60m. That was his highest value in the market. Did you hear anybody say he will be cheaper cos he would have been in his last 2 years? Of course not. Again it was relevant only to us as the selling club as we had to make a decision at that time. Now when he got to his last year it was completely different and his value plummeted.
Click to expand...

1000% this.
The Athletic: Xhaka to be offered new contract after Roma failed to make suitable bid

According to The Athletic, Arsenal are set to offer him a new contract. Quite the turn of events. 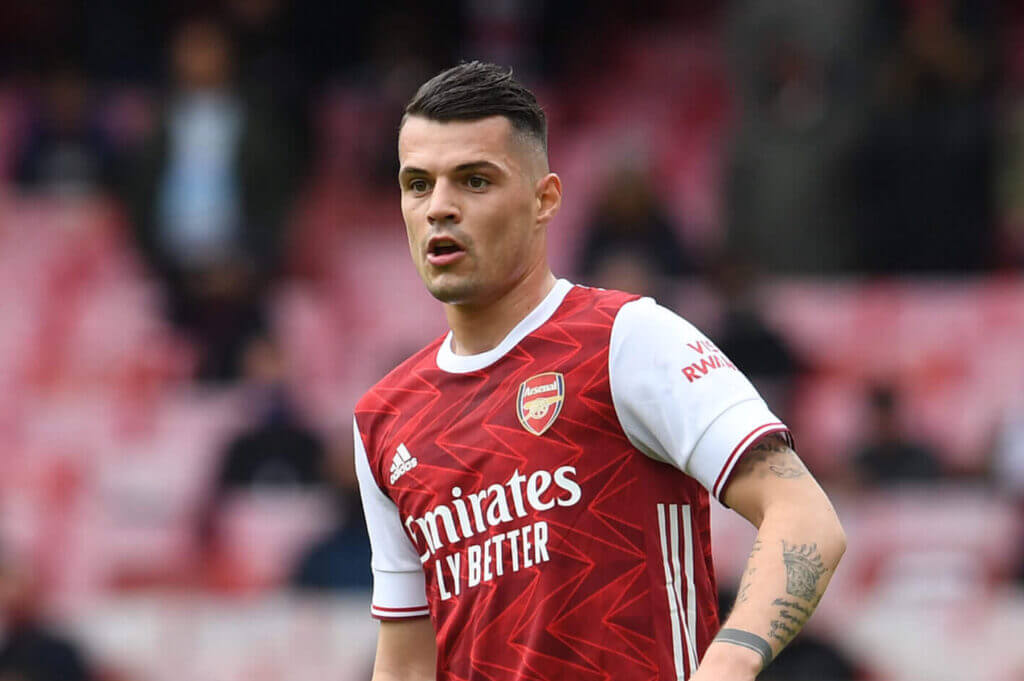 The Swiss midfielder has been linked with a move to Roma, but could yet end up staying at The Emirates for the longer term

Then we are going all in on madders I guess.

Hector B next, blimey.

I reckon it may still be posturing.

You know what, I'm not mad at it. If Roma are lowballing then ****ing keep him and go after the main targets.

Perhaps, after everything, Jose Mourinho and Roma turns out to be nothing more than a red herring. Arsenal are preparing to offer Granit Xhaka a new contract this summer, which would extend the Swiss captain’s time at the club beyond the emotionally charged five years he has spent at the heart of midfield.

Xhaka is 28 years old and his stock spiked after an excellent display for his country at Euro 2020. While Arsenal gave consideration to a sale, that has not so far been matched by bids of sufficient consequence. With that in mind, and balancing up the amount of money necessary to replace him versus the qualities he brings both on and off the pitch, qualities which have been well regarded by every manager he has ever played for, Arsenal have come around to the idea that retaining him could be an efficient solution during what they hope will be a very busy window.

It is all very well for critics to insist moving on from Xhaka is necessary to move on stylistically, but Arsenal can only operate according to market forces.

His current deal was signed in 2018, a few months after Arsène Wenger left Arsenal, and has two years left to run, so there is an element of the club protecting their asset. If no suitable sale presents itself then next summer, with a year to go, Xhaka would command an even smaller transfer fee or be in a position to run his contract down.

Addressing the centre of midfield has been a key issue for some time, with changing the technical make-up of that area deemed key to a faster and more progressive game plan. Even before this window opened it felt as if Xhaka’s departure would prompt a reset in that department.

The arrival of Albert Sambi Lokonga is regarded as promising, but given his youth, a more authoritative and experienced option has also been chased. Manuel Locatelli always looked ambitious, and Ruben Neves was a name in the mix early on in the window before fading into the background.

Xhaka was under no illusions that a “For Sale” sign was hung on his peg this summer, even though he was always happy to stay. If that is how it now turns out, it frees Arsenal up to attend to the multiple other deals they are hoping to make happen. With Lokonga and Nuno Tavares already settling in, the Ben White announcement imminent, and pots boiling at right-back, creative attack and centre-forward, perhaps it is just too much to add a transformative central midfielder into the mix as well when they have at their disposal a player at peak age who showed just what he is capable of with, for example, that eye-catching display against France during the Euros.

That, of course, brings us to the crux of Xhaka’s divisive experience at Arsenal. He is capable of excellence, and also of crass moments which can cost his team. He can play with outstanding responsibility, and also be suddenly reckless. He is an emotional man and an emotional player. That is not about to change.

But what can be tweaked is the balance of the team, to take some of the pressure off the situations which make him vulnerable. Last season Xhaka at times played a very specific role which suited him and those around him — as the left-sided midfielder who can slot into the defensive line when Kieran Tierney, or perhaps the speedy Tavares in the upcoming campaign, go pelting forwards up the left flank on the overload.

Exactly how comfortably White takes control of the back line, or how much more dominant Thomas Partey can be in midfield, could have an effect on how much Xhaka puts himself into difficulty. Sometimes the moments he gets himself into trouble come about because, without a dynamic burst in his physical make-up, he is overstretching or trying to overcompensate for problems around him.

Xhaka returned to London Colney last week after his extended post-tournament holiday. As things stand he is back in training, focusing on the start of the new season. While his head may have been turned by speculation about a move to Serie A, he slots straight back into life at Arsenal, ready to help the team and in particular to help the new arrivals settle in. His attitude in the dressing room is a big tick in his favour as far as Mikel Arteta is concerned.

There remain a few issues to solve across midfield. Partey is a certainty to start when fit — although Arsenal have to plan sensibly for his absence during the Africa Cup of Nations which begins next January. He has looked notably sharpened in pre-season and looks set to be far more influential. Lokonga has impressed with his early steps into the team but it is accepted he is not expected to be an instant fixture as he gains know-how and some physicality.

Mohamed Elneny is still there, Lucas Torreira’s future needs sorting in all likelihood away from the club, and there remains question marks about whether Joe Willock and Ainsley Maitland-Niles will stay or go.

Arsenal are struggling to generate income through sales. The wisdom in spending a fee in the £30-40 million bracket required to buy a replacement for Xhaka needs setting against all the other business, what he offers, and the fundamental question of whether he can be more effective with some different players around him.

The relationship between Arsenal and Xhaka has a chequered history. It looks like it is not necessarily over yet.
Threadmarks